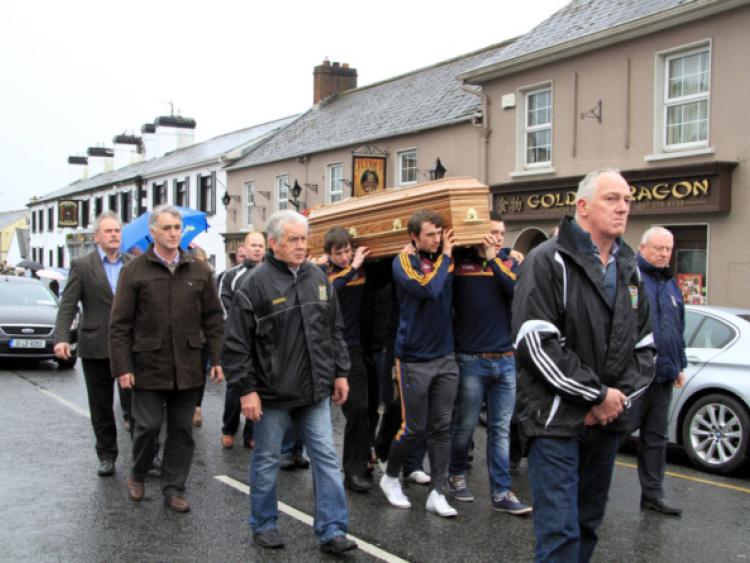 ‘Gerry was very much an FG man and as a politician he did the State some service; he did service as an educator, a sportsman, a husband, a father, a grandfather, a neighbour, a friend’ - the words uttered by Fr Ber Hogan, Parish Priest in Drumlish during the Funeral Mass of former Cllr, Gerry Brady last Saturday.

‘Gerry was very much an FG man and as a politician he did the State some service; he did service as an educator, a sportsman, a husband, a father, a grandfather, a neighbour, a friend’ - the words uttered by Fr Ber Hogan, Parish Priest in Drumlish during the Funeral Mass of former Cllr, Gerry Brady last Saturday.

Gerry Brady will probably be best remembered as a founder member of Fr Manning Gaels - a feat that brought together the parishes of Drumlish and Ballinamuck and he was instrumental in the purchase and development of Monaduff Park.

“He played for and managed Fr Manning Gaels and also served on the executive,” Fr Hogan continued as the stillness in the little church upped a notch as he spoke.

“He was particularly good at motivating teammates and protecting younger players; watching his sons win the 1996 championship was one of Gerry’s proudest moments.”

For the greatest part of Gerry Brady’s teaching career, he taught history and English at Moyne Community School. In later years he became the school’s home liaison officer and it was a role that Gerry excelled in. His sensitivity to those who were most vulnerable was often remarked upon as he served on the board of Co Longford VEC and the boards of management at Ardscoil Phádraig in Granard and Moyne Community School.

“Gerry loved poetry and quoting lines of poetry,” Fr Hogan smiled as he added, “as long as he wasn’t asked to quote a whole verse!”.

“He was the third generation of his family to serve in local politics taking over from his late mother Mary Ellen. He was very proud to see his son Pauric become the fourth generation of Bradys to take a seat on the local council.”

Gerry Brady served as a local area representative for the Drumlish Electoral Area for 29 years and was also elected County Mayor.

“One of his proudest moments as a politician was the turning of the sod on the development known as Abbott,” said Fr Hogan, before pointing out that Gerry was more a negotiator than an agitator in the political sphere.

“Having said that, he did wind people up including politicians, sports people, students and indeed members of his own family,” the priest chuckled.

“He loved the buzz of people but he also loved the quiet and tranquility of being in the bog saving turf or the hayfield making square bales, fishing or shooting - the simple country lifestyle.

“But most of all Gerry was a family man; he loved his family. Elizabeth’s deteriorating health took its toll on Gerry - it was something he never really recovered from. For Gerry, life without Elizabeth wouldn’t be the same.”

Following the Funeral Mass, Gerry Brady was laid to rest in the new cemetery and Elizabeth’s ashes placed beside him.

“For those who are left behind this is a heavy cross,” Fr Hogan continued. “Indeed our hearts go out to the family who have lost both their parents in such a short space of time.

“As the Book of Wisdom says - it is not how long we live that matters, but how well we lived.

“Gerry’s life was truly fulfilled and he and Elizabeth are reunited again.”

Fr Hogan then concluded proceedings by quoting the following lines, lines he added that paid testament to the lives lead by Gerry and Elizabeth Brady.

‘The memories and love I leave behind are yours to keep, I have found my rest; I will turn my face to the sun and now I sleep’.