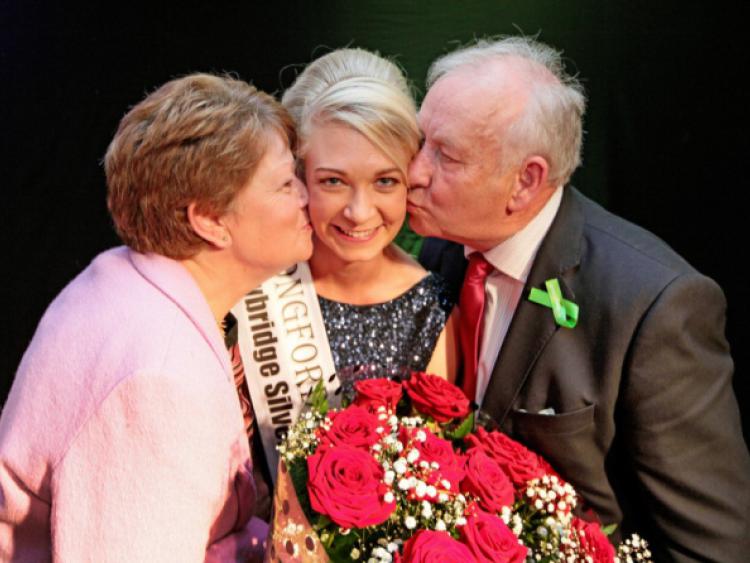 A long-time fan of the Rose of Tralee, 25-year-old Daphne Howard was thrilled to be named 2015 Longford Rose at Saturday night’s selection.

A long-time fan of the Rose of Tralee, 25-year-old Daphne Howard was thrilled to be named 2015 Longford Rose at Saturday night’s selection.

Back home after a number of years in Dublin, Daphne decided that it was a good time for her to enter, a choice which was cemented when she had a chance meeting on a plane with a group of Irish Roses, who were heading off to do charity work in Chernobyl.

Daphne, daughter of Ann and Richard, says she “loved every minute” of the Rose selection day and night, adding that the girls all “clicked and everybody was really easy-going.”

Not feeling any pressure to win, Daphne said that she was quite relaxed talking to MC Benny O’Brien, particularly as she had appeared on stage with him just two weeks previously in ‘Fiddler on the Roof’.

An extremely eloquent young lady, Daphne impressed during her interview, before playing a heartfelt piece on the piano, dedicating her performance to her late neighbours, Gerry and Elizabeth Brady.

Still stunned by her win, Daphne was extremely grateful for the support she has received over the last number of days. Looking forward now to the Regional Festival in Portlaoise in June, the Creenagh native praised her predecessor, Kathleen Mahon, saying, “she’s just paved such a terrific path for young Irish girls”.

Hoping to promote Longford tourism and represent her county well during her reign, Daphne returned to her classroom in Tashinny NS on Monday. Greeted by flowers, balloons, and excited co-workers and pupils, Daphne laughed, “The girls especially, they can’t believe they’ve got the Longford Rose standing in front of them every day - and she’s giving out homework!”