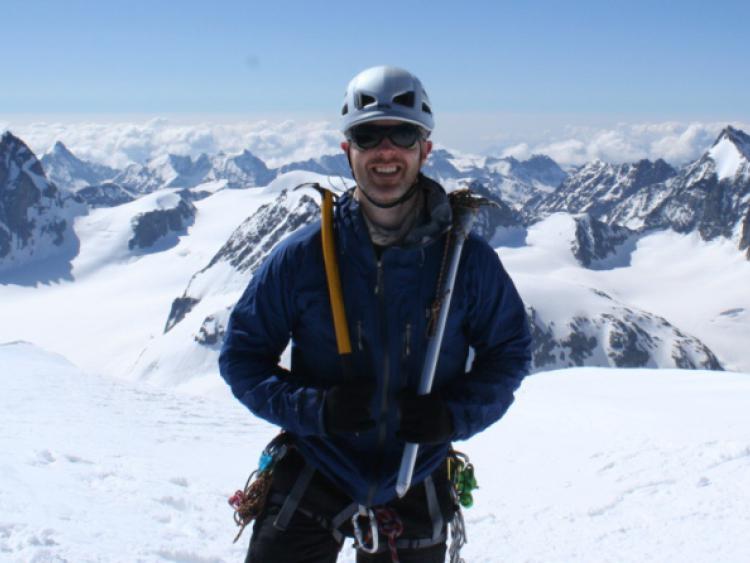 A Longford mountain climber attempting to scale Everest narrowly avoided being swept away by an avalanche which hit the mountain’s Base Camp in Nepal after a devastating 7.9-magnitude earthquake struck the country last Saturday.

A Longford mountain climber attempting to scale Everest narrowly avoided being swept away by an avalanche which hit the mountain’s Base Camp in Nepal after a devastating 7.9-magnitude earthquake struck the country last Saturday.

Paul Devaney, a native of Killoe, was positioned at the camp as he prepared to begin the first stage of his final Seven Summits climb the following day, he told the Longford Leader by email from his team’s new base at Pheriche.

“We were in the food tent on the morning of the quake and I noticed the table starting to move, then a violent movement,” he said. “I ran outside and the entire Khumbu Glacier was moving violently under my feet. Our camp was directly under the icefall so I stared up, expecting any danger to come from there.

“My climbing buddy Teo from Norway screamed at me to turn around, and I then saw a wall of snow as high as I could see coming towards our camp at frightening speed. It was a massive avalanche from Pumori triggered by the quake. We just had enough time to dive into the food tent and scurry under the table before the wall of snow and energy hit. Between the quake and the avalanche we didn’t really know what had happened.”

As the scale of the tragedy became apparent, the mountaineers were drafted in to assist with the rescue operation.

“The medical camp somehow survived but everything around it was destroyed,” Mr Devaney explained. “The medics were attempting a camp-wide triage effort. I saw bodies lying waiting to be covered and a mixture of seriously wounded and walking wounded. It was like a war zone.”

Summing up the harrowing nature of the scenes he witnessed, Mr Devaney said: “By the time I got back to my camp that evening I was exhausted and emotionally shattered. I wish I could have done more. I wish I could have got there earlier. I cannot find words to describe the heroics performed by the medical team and those charged with organising rescue and triage. I knew some of the people being treated for serious injury and I knew some of the people lying still under the blue plastic covers.

“I wanted to sit and cry but the danger of quakes had not passed, and so we were instructed to put on our helmets and not to sleep so that we could react immediately.”

After meeting with other climbers to discuss their options, Mr Devaney decided to evacuate the area.

“The families of many Sherpa (native guides) were now homeless and so we were likely to see a massive outflow from base camp as they returned to help rebuild their homes,” he added. “As I crossed the heli pad I saw [US mountaineer] Garret Maddison standing over the body of his good friend and my heart bled for him.”

Mr Devaney ended by saying, “I am in the safety of Pheriche and now we sit and wait. The climbing season is most certainly over now. Our next decisions are about how to get home. This country has been shaken to its core.”

Paul Devaney has posted a video on YouTube showing the extent of the devestation at Base Camp. Click here to view it.