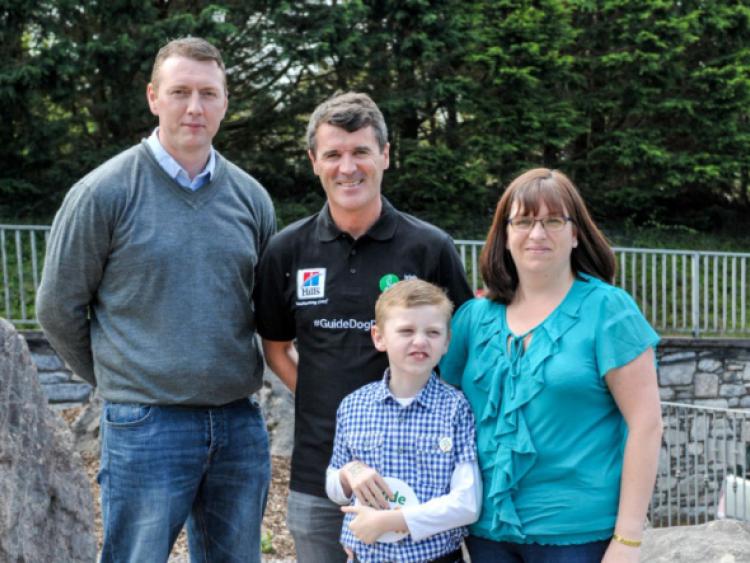 Roy Keane and virtues of a more sensitive and compassionate side don’t often go hand in hand.

Roy Keane and virtues of a more sensitive and compassionate side don’t often go hand in hand.

Yet that’s precisely what Aughnacliffe couple Gemma and Peter D’Arcy together with their son Oisin discovered recently as they came face to face with the Ireland Assistant Manager.

They were in Cork at the Irish Guide Dogs headquarters to mark Guide Dog Day which takes place on Friday (May 1).

Their dog, Fletcher, has played a major role in helping Oisin cope with the daily demands of autism.

“Oisin is a different child now, when people ask Oisin about Fletcher he tells them Fletcher is not a play dog, he is a working dog,” said Gemma.

“Fletcher seeks Oisin out when he senses Oisin is getting anxious and is always by his side.”

It’s a far cry from the upset of 2010 when then-two-year-old Oisin was diagnosed with Autism Spectrum Disorder (ASD).

Gemma was pregnant with her fourth son at the time and in her own words felt like she had been “hit by a boulder”.

Oisin was non-verbal at the time and did not even babble. The next few years were hard, given Oisin’s lack of any meaningful sense of danger.

It deteriorated to such an extent that Gemma could not even leave the house on her own.

The tipping point came soon after when Gemma’s routine attempts to put the rubbish out coincided in Oisin running out the door and heading straight for the main road.

Fast forward five years, the family no longer have to fret over their son bolting.

It’s a habit the D’Arcy’s believe would not have happened but for the intervention of their trusted Assistance Dog, Fletcher.

“We do not have to plan our outings anymore,” added Gemma.

“Before Fletcher, it was always a case that one parent would stay home with Oisin while the rest of the family went out.

“Now there are no limits as to where we go as a family. Fletcher has given us a new lease of life.”

The D’Arcy’s were one of a number of families the former Manchester Utd and Ireland star met to launch Guide Dog Day this coming Friday.

The owner of two dogs himself, a German Shepherd and a Labrador, Keane even admitted: “I’d be lost without them (dogs) they are a massive part of our lives.”

No doubt the D’Arcy’s share those exact same sentiments.