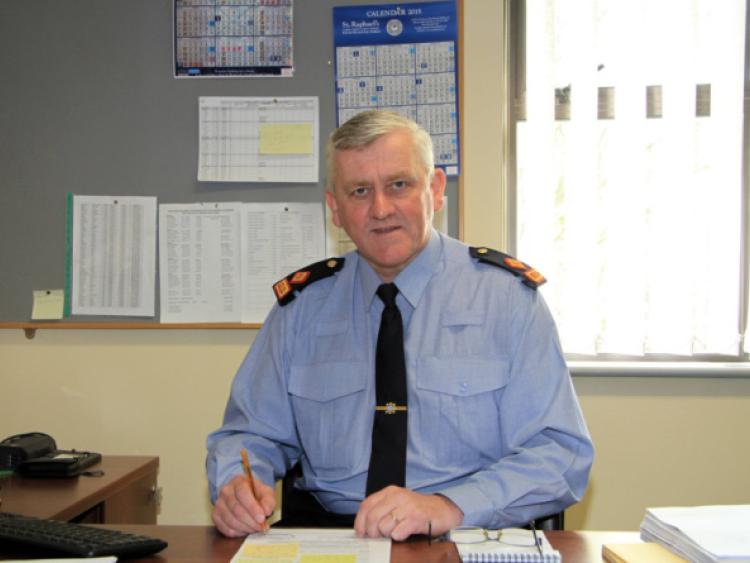 He may be in the job a matter of weeks, but already new Longford Superintendent Fergus Treanor has his eye on improving crime levels locally.

He may be in the job a matter of weeks, but already new Longford Superintendent Fergus Treanor has his eye on improving crime levels locally.

The Monaghan native spoke to the Leader this week about his rise through the ranks of Ireland’s police force, his recent appointment and his aspirations for the future.

The 50-year-old Monaghan native offically took over the vacuum left by his predecessor Denis Shields who stepped down in November 2013, in recent weeks.

Not much, truth be told, was known about the Monaghan native before he was formally introduced to the local judiciary at a District Court sitting in March.

That was until a quick scout through the wonders of internet search engine, google, threw up some eye-opening insights.

Key roles in the Carty Inquiry, which investigated claims of Garda corruption in Donegal, the Veronica Guerin inquiry and the successful conviction of several other high-profile rackets in the border regions were all linked to his name.

In fact, Longford’s most senior officer has more than 30 years of service under his belt.

The last 12 of those years have been spent as Detective Inspector in the Cavan/Monaghan Division.

“I was senior investigating officer for all the serious crime enquiries,” he stoically remarked.

“We had nine murder inquiries there in three and a half years in Cavan/Monaghan.”

The most recent of those included the manslaughter of Cavan archaeologist Emmett Connolly.

And like much of his other endevours over the years, that led to a successful conviction.

In fact, the only blot on his Garda copybook has been the double murder of Dublin men Eoin O’Connor (32) and Anthony Keegan (33) who went missing in the Ballyjamesduff area last year.

That said, and without going into any of the finer details of the case, you get the impression that might be about to change.

“I don’t want to say too much, but (that) investigation is well advanced,” came the forthright response.

Turning his attentions to the Longford area, Supt Treanor admitted he is already well aware of the challenges his new post commands.

“Every new superintendent is briefed on the issues that have arisen in the Longford area over the last few years.

“My job is to continue the service that is provided here and ensure that issues that have arisen are adequately dealt with.”

Not surprisingly it’s headline statistics such as road deaths, drugs and burglaries that are given specific mention.

“I think every town and village in the country has an issue with drugs,” he insisted.

“My own background, not just the serious crime side, would be in the area of drugs.

“We have upped the numbers within the drugs unit here in Longford and certainly it would be very much part of my focus to ensure we manage and deal with the issues that are arising locally.

Goals and targets aside, there’s a likeable steel to the man charged with leading Longford’s fight against crime.

There’s a genial side to the man too, not least when he comically suggests his own GP wouldn’t ask him the type of questions this particular journalist has thrown at him.

Joking aside, here is a man who clearly takes pride in what he does.

An experienced and self styled “hands on” garda chief he may be, but news that a new superintendent being assigned to Granard is expected to take some of the weight off his broad shoulders.

Until now, and given the fact Granard has been devoid of a Garda chief following Tom Murphy’s transfer to Dublin, Supt Treanor has had to divide his time between both districts.

Not that he’s keen to make any major changes to the status quo that exists when it comes to managing the day to day concerns of a busy Garda Station.

“I’m assessing it and I’m no rush to make decisions,” he confidently asserted.

“My focus would be to make sure we get at the people we need to be getting at.

“I am impressed with the service that had been provided. It’s my job to continue that service. I am quite happy with the work that has been done and it’s really about continuing that focus in relation to the key issues that are facing communities.”

Just as tackling crime is a key objective of his, so too is curbing lawlessness at its very fingertips.

“Crime prevention is a major issue for us and I would encourage people to get involved in the text alert systems and being aware of the security of their own property.

“The basis of the justice system in this country is that people come to the guards, they make their complaint, we investigate it and bring it before the courts. Without the public’s support, that system doesn’t work properly.”

And like the more disciplined side of his job, maintaining a transparent and efficient relationship with the wider public is something the new Longford superintendent is keen to uphold.

“Without those complaints and without the proper investigation of those we don’t get the people before the courts that we really should be getting.”