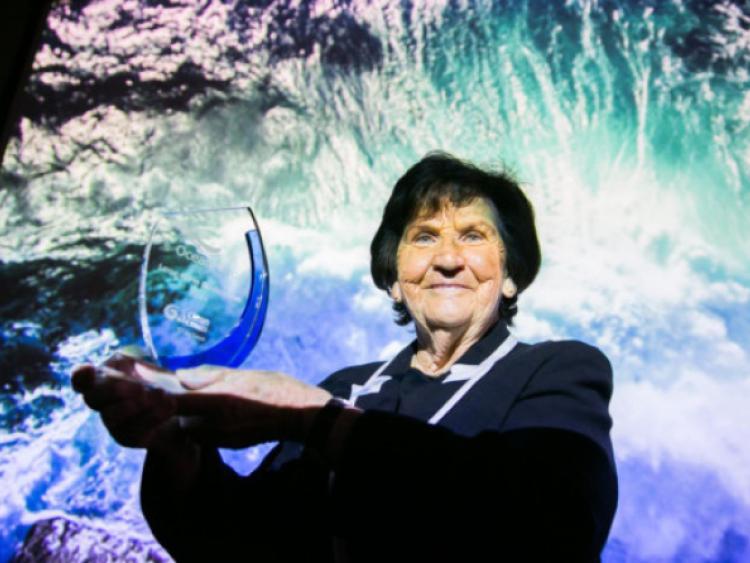 honoured at the An Taisce Ocean Heroes Symposium in recognition of her contribution to her local community.

A member of the Sandycove Coastcare Group, Margaret was presented with the ‘Ocean Hero Life Dedication Award’ in recognition of her role in keeping her local beach clean.

At the symposium in the Royal College of Physicians, Dublin, An Taisce’s Coastal Programmes Manager Annabel FitzGerald praised Margaret and her fellow award recipients.

Margaret admitted that she was ‘very surprised’ to be bestowed with the top award. “I’ve been cleaning that beach for nearly eleven years now, in good weather and bad. I get great help from the Sandycove Coastcare Group.”

She added, “People leave everything behind them on the beach, including shoes, clothes and underwear. I think they must go home wrapped in a towel!”

Margaret said it is really important to keep the beach clean because “it’s the closest thing to heaven when the birds are singing.

The charismatic Longford lady is also one of the driving forces behind the ‘Friends of the Forgotten Irish’ charity and recently, she was in the London Irish Centre to present more than €4,000, the proceeds from the sixth annual Irish Coffee Morning held on St Patrick’s Day 2014 at the St Joseph’s Pastoral Centre, Glasthule, Dun Laoghaire, to David Barlow, Chief Executive of the London Irish Centre and Ambassador of Ireland to Great Britain, Dan Mulhall.

Margaret, who was the 1996 Longford Association in Dublin Person of the Year, explained, “All the funds raised go towards the elderly homeless in London, that are living out their lives in poverty, isolation and loneliness.”

The 28th annual Dun Laoghaire Christmas Day Lunch for people living alone, an event that was founded by Margaret in the 1980s, takes place from 10am to 2.30pm at Blackrock Rugby Club.

Margaret says she is looking forward to the lunch and remarked, “Despite all the festivities going on around them, Christmas Day can be a time of isolation and sadness for many people who may be alone, unwell, bereaved or unable to afford a traditional meal.”