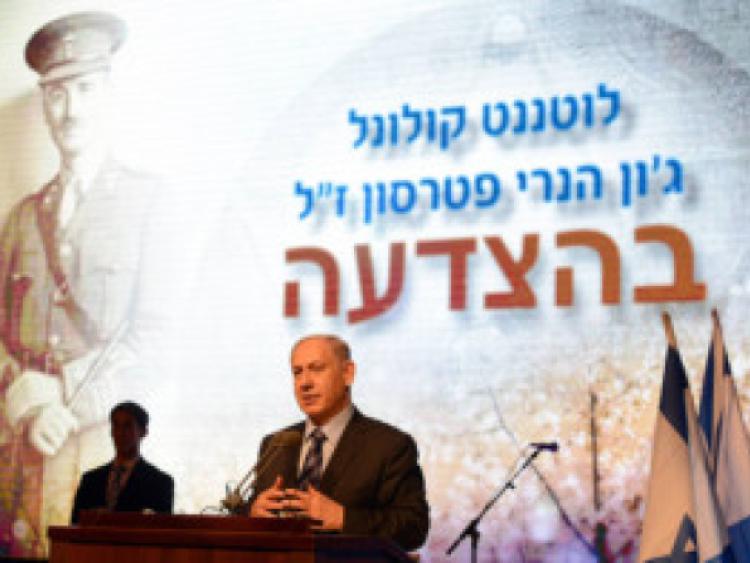 Leading Israeli Government figures turned out last week to attend the burial of a Longford man who came to be regarded as a hero of the Jewish State.

Leading Israeli Government figures turned out last week to attend the burial of a Longford man who came to be regarded as a hero of the Jewish State.

The ashes of John Henry Patterson and his wife Frances, who both passed away in 1947, were interred in the cemetery of Moshav Avihayil in northern Israel last Thursday, December 4, during a ceremony attended by Prime Minister Benjamin Netanyahu and Defence Minister Moshe Ya’alon, and which was broadcast live on national television.

Patterson, who was born at Forgney, near Ballymahon, in 1867, was a Lieutenant Colonel in the British Army during World War I. He became the first man in over 2,000 years to lead a Jewish fighting force into battle when he commanded the Jewish Mule Corps at Gallipoli. He went on to serve as commanding officer of the 38th Jewish Battalion of the Royal Fusiliers in the Palestine Campaign - part of the Jewish Legion, from which the modern Israeli military traces its origins.

Speaking during the ceremony, Prime Minister Netanyahu hailed Patterson as “commander of the first Jewish fighting force in nearly two millennia. And as such, he can be called the Godfather of the Israeli Army.”

The time he spent serving alongside the Jewish soldiers had a profound influence on Patterson, who admired their bravery and dedication to the aim of establishing a Jewish State, and subsequently he became a committed Zionist.

Last Thurdsay’s ceremony was also a poignant one for Prime Minister Netanyahu, as Patterson was a family friend and godfather to his brother Yonatan, who died leading the famous Israeli raid on the Ugandan capital, Entebbe, in 1976, to free Israeli hostages being held there.

John Henry Patterson died in the USA in 1947 and had originally been buried in California. However, his last wish was to be laid to rest alongside his Jewish Legion comrades at Moshav Avihayil, with his grandson, Alan Patterson, playing a pivotal role in bringing this to pass.

Addressing those who attended last Thursday’s interment ceremony, Prime Minister Netanyahu said: “In bringing his ashes to Israel and laying them to rest here, beside the soldiers of the Jewish brigades that he established, we come full circle historically, and we repay a very great debt to one of the heroes of our people, one of the greatest supporters that Zionism, the Jewish people, and the State of Israel ever had. We salute you, John Henry Patterson.”

A life filled with swashbuckling adventure

John Henry Patterson was born at Forgney in 1867 to an Anglo-Irish Protestant father and an Irish Catholic mother, and at the age of 17 he joined the British Army.

He rose through the ranks to become a Lieutenant Colonel, and in 1898 was assigned to Tsavo, in what is now modern day Kenya, to oversee the construction of a railway bridge.

The laborers camp at Tsavo was constantly targeted by lions that had developed a taste for human flesh, and on St Patrick’s Day in his first year there, Patterson hunted down and shot two of the animals, which are now displayed at the Field Museum of Natural History in Chicago.

The experience provided the basis for Patterson’s best-selling book: ‘The Man-eaters of Tsavo’. It later inspired three Hollywood movies, the most recent of which, 1996’s ‘The Ghost and The Darkness’, featured Michael Douglas, with Val Kilmer playing the role of Patterson.

While on safari in Africa, a soldier accompanying him took his own life, and rumours circulated that Patterson had been involved in an affair with the man’s wife, who had also been a member of the travelling party. Finding himself the subject of high society gossip, Patterson went as far as threatening to sue Winston Churchill for slander.

The episode came to the attention of the American writer Ernest Hemmingway, who used it as the basis for his short story, ‘The Short Happy Life of Francis Macomber’, which itself was adapted for the big screen as ‘The Macomber Affair’ in 1947.

Separately, his exploits in Africa also led to a sub-species of eland antelope being named after him: Taurotragus Oryx Pattersonianius.

In 1895 he married Frances Helena Gray, who was one of the first women in Great Britain to obtain a law degree. The couple had one son, Bryan, who went on to become a paleontologist at the Field Museum in Chicago - the same museum where his father’s lions are displayed.

Patterson served during the Boer War, winning the Distinguished Service Order, and later re-joined the British Army to fight in World War I - at which time he was 50 years old.

It was during this conflict that he gained the distinction of becoming the first officer to lead a Jewish fighting force onto the battlefield for more than 2,000 years, and the time he spent with the Jewish soldiers prompted him to write two more books - ‘With the Zionists in Gallipoli’ and ‘With the Judaeans in the Palestine Campaign’. His experiences also prompted him to become a dedicated Zionist himself.

In later life, Patterson moved to the USA and lived in California. He died in his sleep on June 18, 1947, at a friend’s residence in Bel Air, with his wife also passing away just six weeks later. Both were interred in Los Angeles.

Last Thursday, December 4, the ashes of both John Henry and his wife were re-buried in Israel at a ceremony recognising him as a hero of Zionism.