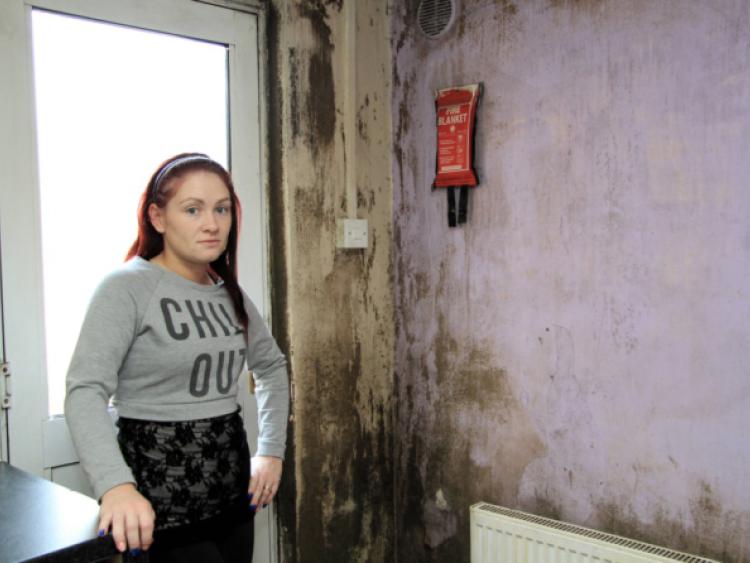 A distraught mum of three has claimed her family’s health is being put in jeopardy because of the deteriorating state of their council owned house in Longford town.

A distraught mum of three has claimed her family’s health is being put in jeopardy because of the deteriorating state of their council owned house in Longford town.

Trina Reilly said the situation has become so grave, residue caused by persistent dampness has left her home for the past eight years virtually uninhabitable.

To make matters worse, she said there were real and pressing concerns over the long term health of her three children, all of whom are under the age of seven.

“There is mould all over the walls in my kitchen,” she said in a raised voice this week.

“My youngest Ally gets runny eyes the whole time and I regularly get chest infections which I never got before I moved into this house.”

She explained the loss of her job a couple of years ago has resulted in her slipping behind on her rent, an issue she has tried hard to address.

For the past number of months, the long standing council tenant has set aside €12 each week to steadily claw back an arrears bill she claims stands at around €1,500.

In recent weeks, those efforts have gradually fallen away due to the lack of response she claims has been forthcoming from local authority housing officials.

“Yes, we have arrears,” she accepted.

“But they (council) won’t do anything because of it. An engineer was supposed to come down in February but that never happened. A council worker who did see the damp said it was absolutely disgraceful.

“It’s that bad that the plaster is falling off the wall and a new skirting board we put in three years ago is now rotten.”

Her attempts to try and resolve the worsening problem has led her to contact a number of local councillors, one of whom Cllr Gerry Warnock, she singled out for particular praise.

“Gerry tried to do something about it in fairness, but we are still in this mess,” she said.

When contacted for an official response, Longford County Council said it was not in a position to comment on individual cases.