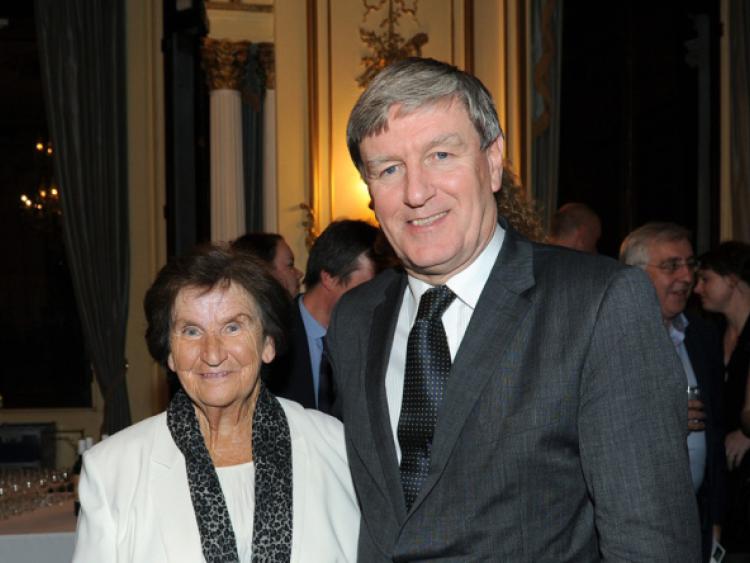 Mullinalaghta native Margaret Brown, a member of ‘The Forgotten Irish Emigrants’ group, is bracing herself for an exciting and hectic Christmas.

Mullinalaghta native Margaret Brown, a member of ‘The Forgotten Irish Emigrants’ group, is bracing herself for an exciting and hectic Christmas.

She will be coordinating the 27th annual Dun Laoghaire Christmas Day Lunch, while four days later, Sunday, December 29, she will be at Leopardstown Racecourse for the the final day of the Christmas Festival which is the first event of The Gathering’s New Year’s celebrations.

Sir Terry Wogan is the Brand Ambassador for this event, while Mary Black and Finbar Furey will be entertaining race goers on the day. And this great day out will also be raising funds for the London Irish Centre charity.

As Margaret told the ‘Leader’, “There will be a donation from each admission ticket sold on the day going towards The London Irish Centre for the very vulnerable Irish emigrants who left their homeland and emigrated in the 50’s and 60’s, worked in casual labour such as on the building sites and now as they move into their older years find themselves living on the streets, destitute and are struggling to survive.”

Other events in Dublin as part of the NYE Gathering will be the People’s Procession of Light, the NYE Dublin Countdown Concert on College Green featuring ‘Madness’ and on January 1 The Big Brunch takes place at Meeting House Square.

The feature race at Leopardstown on December 29 will be the Grade 1 ‘Ryanair Hurdle’ (formerly the Istabraq Festival Hurdle).

The Ryanair Hurdle is one of the top hurdle races of the season and has produced many fine champions over the years including Istabraq, Hurricane Fly, Moscow Flyer and Brave Inca. The race is often seen as a pointer for the Champion Hurdle in Cheltenham.

Gathering events hosted by ‘The Forgotten Irish Emigrants’ have been short-listed for two awards.

“We are delighted to be in the running for two awards, firstly the Chamber’s Ireland Excellence in Local Government Award 2013 and The LAMA Community & Council Awards 2014,” explained Margaret.

In 1986, Margaret founded the Dun Laoghaire Christmas Day Lunch having realised the huge need for a festive meal to be provided on Christmas Day itself for those who live alone, are isolated, bereaved or in financial difficulty on the very day when family is so important. The main event takes place in Blackrock Rugby Club.