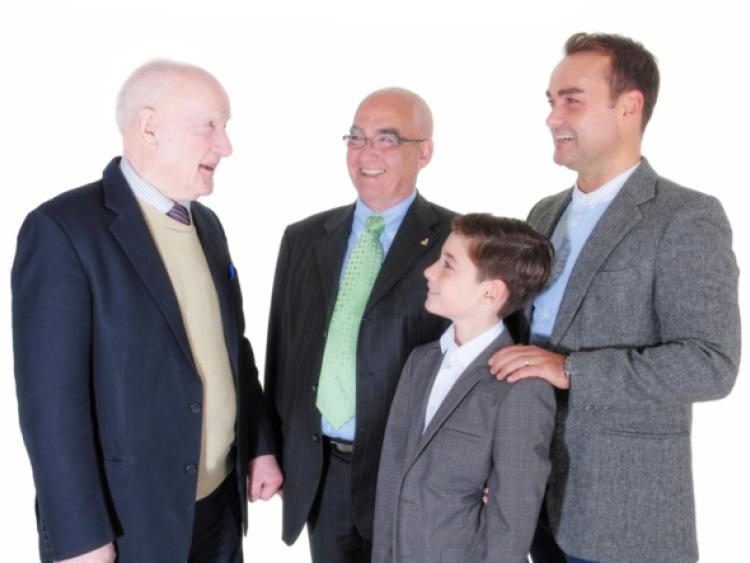 Not too many of us hold the honor of bringing up the Relics at a new bishop’s first Mass, especially just weeks shy of our one hundredth birthday!

Not too many of us hold the honor of bringing up the Relics at a new bishop’s first Mass, especially just weeks shy of our one hundredth birthday!

But this is exactly what happened for Longford town’s Larry Nolan recently, when four generations of the Nolan Family gathered together to carry the items to the altar during Bishop Francis Duffy’s first Mass at St Mel’s Cathedral Centre in Longford town.

Larry, together with his son Paddy, grandson Damien and great grandson Aaron were specially-invited guests of Bishop Duffy’s on the day with official duties to carry out, and it was a day that Larry will always remember.

Although a native of Mooncoin in Co Kilkenny, Larry Nolan moved to Longford in 1939 after he joined the army, and he wasn’t long settling in. A man of deep religious faith, he was a regular Mass-goer at St Mel’s Cathedral in Longford town and for many years was the person who lit the furnaces under the Cathedral to warm the church for Christmas Eve Mass. “My heart broke the night the Cathedral burnt down,” he added. Larry’s memories extend from Kilkenny to Longford and beyond, and he has most certainly found contentment; but regarding his longevity - well he boils that down to two simple factors, “hard work and starvation”.

“I was in the Volunteers and we came up to Longford with the Emergency Army in 1939,” he recalled, adding that “I hated the Army”. “When you joined the Army that time, you got a new coat and new boots - things you just would not have - that is why I joined the Army.” Having served in various locations including Longford, Athlone and Cork, Larry eventually left the Defence Forces after five years. It was a challenging time in Larry’s life and one he remembers well. “I remember the ‘Big Maneuver’- we left from Athlone to walk to Cork with full marching orders,” he said. “We were to be stationed in Mitchellstown and we walked the whole way. In those days, Dev would meet you at the end of the journey, so we met him that day in Mitchellstown - they told us it would be a good thing for us to meet him.” Larry also kept guard over the political prisoners who were on hunger strike in Collins’ Barracks, and he remembers too, helping the farmers to save the crops in the Bad Harvest of the early 1940s when the Army was ordered in to assist.

Larry Nolan was never idle a day in his life, as he says himself. After the Army, he joined Co Longford Fire Services and was a fireman for over 40 years. He also worked for Longford Co Council and was part of the team that built the houses in Teffia Park in 1950 and on Chapel Street in 1948 - the year of the ‘Big Snow’. “Chapel Street was the first of the buildings after the War,” recalled Larry, and I will always remember the ‘Big Snow’ that year.” He also worked at Lanesboro Power Station for a time, and cycled over and back to work from Longford town. “I had a bad bike, as well,” he quipped, which was no word of a lie either. “I remember there was a very bad fire one time at Claffey’s in Ballymahon, and we went out from the fire station; I got up on the roof with two other fellows. One of the men went ahead of us and the roof suddenly collapsed and he died. Myself and the other fellow were taken to the Infirmary as it was known as back then, and we were hurt, yes, but we had to just get on with it, that is the way it was.”

In 1944 Larry married Eileen Green of Chapel Street and the couple had three sons and one daughter. He played a pivotal role in the community in which he lived throughout his life and was highly regarded by all those who met him. He is even credited with driving the first ever motor car in Mooncoine, which was owned by the parish priest at the time. And, St Mel’s Cathedral it seems, will always hold a special place in Larry’s heart. “It was a very lonesome night when it burned,” he added, softly. “I used to look out from the window of my house and look at it in all its glory; the night of the fire, I looked out that same window and all I could see was flames. It was awful lonesome, but I hope to be still around next Christmas when it re-opens. It will be a very good time for Longford when that happens.”

In conclusion, Larry’s son Paddy added, “It was a great honour for the family to be asked to carry the Relics at the bishop’s first Mass.” “It is great to have four generations of Nolans and especially one who is just a couple of weeks away from celebrating his 100th birthday.”