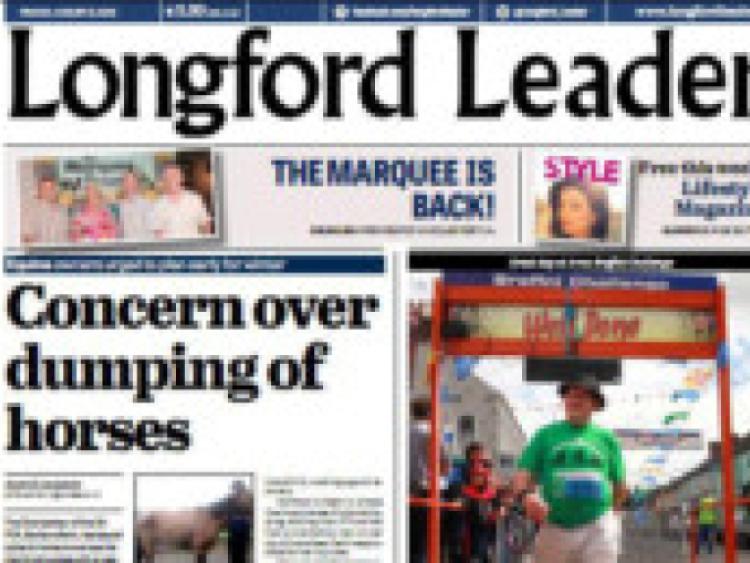 Take a look at what’s making the news in this week’s edition of the Longford Leader.

Take a look at what’s making the news in this week’s edition of the Longford Leader.

This week’s front page story focuses on the ISPCA’s concern over the number of horses being abandoned by their owners. The charity, which has its headquarters in Kenagh, admits it is struggling to cope with the increase in calls for help.

Longford Co Council has asked representatives from the HSE to attend a meeting to discuss the new Healthcare Centre on the Athlone Road in Longford town. Cllr Mae Sexton says she wants answers as to why officials chose a location in the Flancare Business Centre, which is nearly three miles from the town centre.

The Longford Rose, Aisling Farrell is making her final preparations ahead of the Rose of Tralee festival. The medical student, who is a native of Tang, is a former pupil of the Mercy Secondary School in Ballymahon. She will wear a dress by local designer Patrick Casey at the finals, which takes place on August 14 - 17.

Last week’s Lanesboro Gathering has been hailed as one of the most successful events ever to be staged in the town. Known as the ‘Parish Hooley’, there were exhibitions, historical readings and plenty of musical entertainment throughout the weekend.

This week’s paper also features a four-page feature on the upcoming Marquee in Drumlish festival, which runs from August 16 - 18. Amongst the headliners this year are Delorentos, Mundy, Nathan Carter, Declan Nerney, and The Aftermath.

There is also coverage of the official opening of The Dome retail centre at the N4 Axis Business Park in Longford. The Dome is open every Saturday, Sunday and bank holiday, and a wide range of local businesses are represented, selling everything from food and wine, books and antiques, make-up and jewellery.

Amongst the photo features in this week’s Leader are pictures from Ballymahon Vocational School’s graduation dance, the Granard Gathering and Viewmount House’s fifth anniversery celebrations.

And in sport, there is full coverage of the County Championship, where Longford Slashers have to win against Granard St Mary’s if they are to progress, while in soccer Longford Town’s title ambitions suffered another setback after playing out a scoreless draw with Wexford Youths.

All this and more in this week’s Longford Leader, which is on sale now.