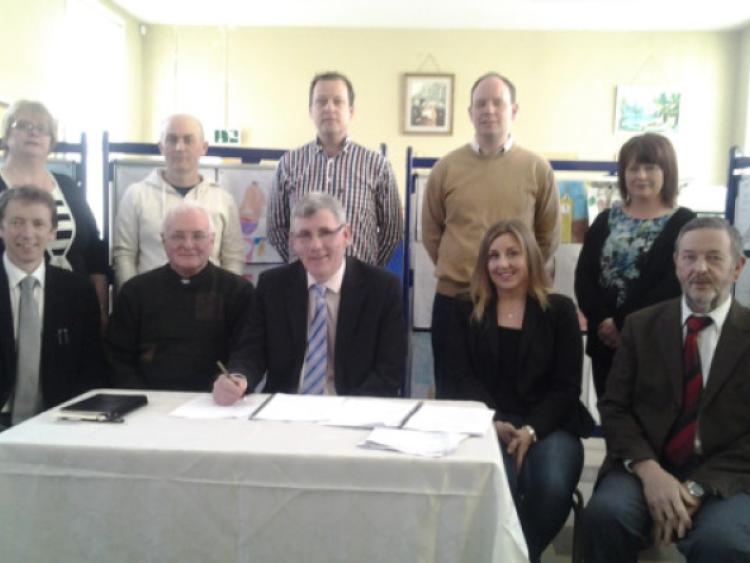 It’s been quite a seven days for the teachers, parents and pupils of St Mary’s National School in Edgeworthstown, writes Liam Cosgrove.

It’s been quite a seven days for the teachers, parents and pupils of St Mary’s National School in Edgeworthstown, writes Liam Cosgrove.

Fresh from confirmation government leaders had given the thumbs up to a new, cutting edge 20 classroom mainstream school, last Thursday saw various stakeholders come together for the official contract signing.

Local Cllr Tom Victory, and chairman of the school’s board of management, said the entire project would take around two years to complete, costing around €3.7m to complete.

Issuing a special word of praise to the project’s main contractors, PJ McLoughlin and Sons, almost identical messages were likewise held back for designers Kenny Lyons and Associates and Dermot O’Keeffe and Associates, both Tullamore, Seamus Fagan and Co, Navan as well as Burke Morrison, Derry.

Politicians, both past, with particular mention given to former TD Peter Kelly and present, also came in for recognition, as did board of management members, parents and pupils.

In a further celebration of the project’s impending commencement, it has been revealed children at the school will take part in a ‘turning of the sod’ ceremony tomorrow (Thursday). Proceedings are scheduled to start from around 11.45am with members of the public being invited to attend.