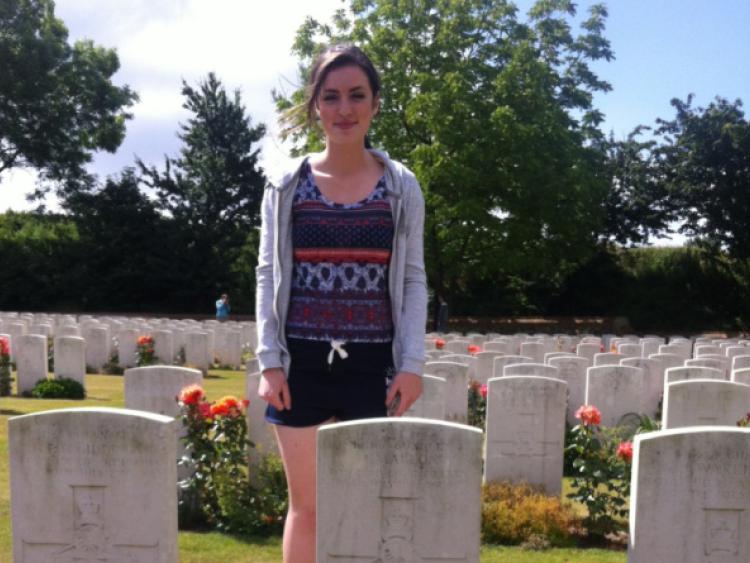 The idea behind the ‘My Adopted Soldier’ programme was that a student from each county would be given the name of a soldier from their county who died in the Battle of the Somme.

The idea behind the ‘My Adopted Soldier’ programme was that a student from each county would be given the name of a soldier from their county who died in the Battle of the Somme.

From there, they would have to research the background, life and death of that soldier. The following summer all of the students would then get the chance to go to the battlefields in Northern France and visit the grave of their fallen soldier. The entire trip would be followed by RTÉ and shown in a documentary.

In order to partake in the project, history students were asked to write an essay on why they were interested in the project and why they thought that they would be a suitable candidate to represent their county. I selected Longford man John Mallon and to my immense delight, my submission was selected. In June, the project reached its pinnacle when I spent three incredible days in France and Belgium visiting the reverent and beautiful war memorial cemeteries, exploring sites such as the Ulster Tower and the renowned monument at Thepville and of course the picturesque city of Ypres in Belgium.

On Friday, June 26, the experience began with a send off from President Michael D Higgins in Áras an Uachtaráin, before we set off to France.

The next day we were at Loghnager Crater, the edge of the German front lines which had been blown apart in July 1916 by the English forces.

John Mallon, was buried at our third stop, ‘Montaubon Cemetery.’ I can’t describe how I felt walking into that graveyard. With all the time I had spent researching John and getting to know his living relatives in Edgeworthstown, I felt as if I almost knew him.

On seeing the indistinct etching of his name on the white headstone, I was lost for words. All that was written on the stone was his name, regiment number, day of death and age, along with a small inscription saying, “My Jesus Mercy” on the very bottom of the headstone. This inscription struck me.

I had in that day already seen a great number of graves and had observed how few inscriptions had been put on the headstones. When I queried this with Gerry Moore, director of the project, he informed me that it was up to the family of the deceased soldier to request a particular inscription through the war office.

I thought of John Mallon, only 21-years-old when he was killed, and I was so moved thinking of his family in the grief they must have endured with the death of their oldest son. It was lovely to think that though they had never been able to visit their son’s grave at least they had left some mark of home with him, a small prayer. Saying goodbye to John, I left my own little token of home with him in a little bag of soil I had taken from the site of his former home in Kilcourcey.

In the subsequent days, we visited all the other graves and had an informative and interesting Ulster tour which was dedicated to the Ulster regiment in the British Army. We were then taken on a tour of some renovated trenches near the Thepville monument. One of the most famous First World War memorial sites in North France, it commemorates all of the fallen soldiers of the Somme Battlefield who had been put in unmarked graves or had no burial at all.

Then we made our way back to Belgium to the historic and beautiful city of Ypres. There we witnessed the stunning memorial service which takes place every day at 8pm, commemorating soldiers in the British Army who died in the city during the war. The ceremony attracts thousands of tourists worldwide.

Finally, our last stop off took place the following morning as we visited the European Parliament in Brussels, where we were hosted by MP Marian Harkin who had also helped Gerry in getting funding for the trip.

The entire experience was both poignant and fulfilling. Visiting my soldier’s grave and the graves of the other Irish soldiers was an extremely profound and moving experience. Such an incomprehensibly strange mixture of emotions hit you as you stand in those graveyards and for me, to stare at the lines of whitewashed headstones makes them seem so endless and vast - it’s harrowing. I could almost envisage all those soldiers, young and old, some the same age as me, all of different social classes, races and religions and yet here they were. Positioned side by side and all of them, every single one, met the same miserable and unjust fate that summer in 1916.

That’s what the whole experience taught me: how futile war is. It taught me about the folly of mankind in their inability to see that one hundred years ago, the same way that in some places they still can’t see it today. Mainly it taught me that I could still relate to all those soldiers today and that people, despite advances in technology and medicine and transport, never change. We are all the same. But that’s why I think history is so important.

Even though it shows us that people don’t change, it can teach us all a lesson if we pay attention to it. We can learn from history, we can learn not to make the same mistakes that we made in the past and that makes all the difference.