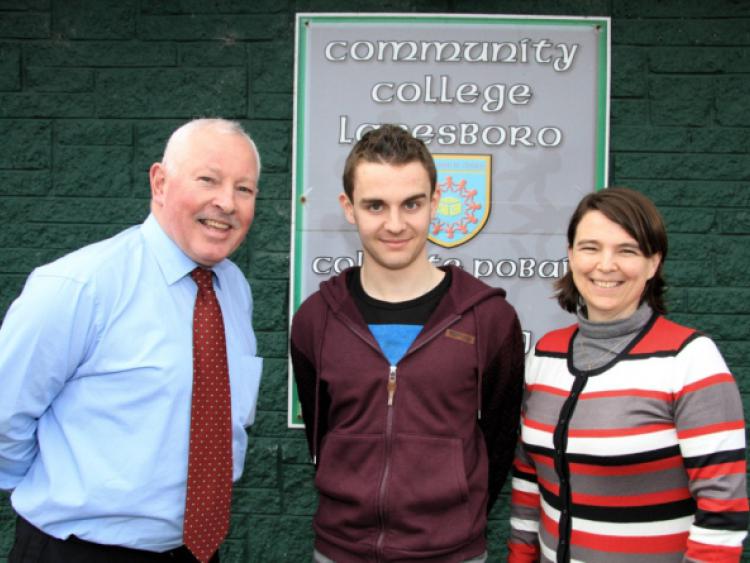 Though only four months in, 2015 is a year that one Lanesboro student is unlikely to forget.

Though only four months in, 2015 is a year that one Lanesboro student is unlikely to forget.

After securing 10 As in his Junior Certificate exams last year, 16-year-old Mark Lyons, son of Michael and Mary, started off this year by coming first in his category in the prestigious BT Young Scientist Exhibition with his project, ‘€2.50 too much? - A statistical analysis of the effect of the GMS fee’. From that, Mark was chosen to take part in the BT Business Bootcamp, with his team topping the competition.

Now, the fourth year student of Lanesboro Community College has shown his language skills, after earning a four week scholarship to Germany.

“It’s super now, just so many great experiences one after the other,” Mark said of his successes, before pointing out that “it’s great to have the opportunity” to take part in such events.

On the basis of his German Leaving Certificate exam, Mark was chosen by the Department of Education and Skills to be interviewed by representatives of the German Embassy, the Goethe Institute and the German Inspectorate, in the hopes of securing one of the sought after scholarships.

Attending the interview, Mark explained that there were students from all over Ireland, some of whom had spoken German from a very young age. “Then there was me in the middle from Longford,” he laughed, before commending his German teacher Ms Ailbhe Sheehan for all her help and support. Though this is only his fourth year learning the language – Mark picked it up when he started secondary school – the talented teenager impressed the panel with his skills, and secured a place in the top five on the day.

“I honestly couldn’t believe it,” Mark told the Leader, before revealing that he would spend four weeks in Germany this summer, working on his German. Following an introductory weekend in Bonn/Cologne, Mark will stay with a German family for two weeks, attending a German school. After this, he will travel to cities including Berlin, Hamburg and Munich to visit museums, theatres and universities as part of a cultural programme.

“It’ll be very good – it’ll be such an experience,” Mark continued, before saying, “German is a good subject and Ms Sheehan is an outstanding teacher.

“I couldn’t have done it without her help.”

Commenting on her students’ achievement, Ms Sheehan explained, “I am very proud of Mark.

“This is testament to his hard work, commitment, ability and natural flair in the subject. To be in the top five in the country is a wonderful achievement for Mark who faced a lot of competition for these much coveted scholarships. It’s great for Mark, for me and for Lanesboro Community College.”