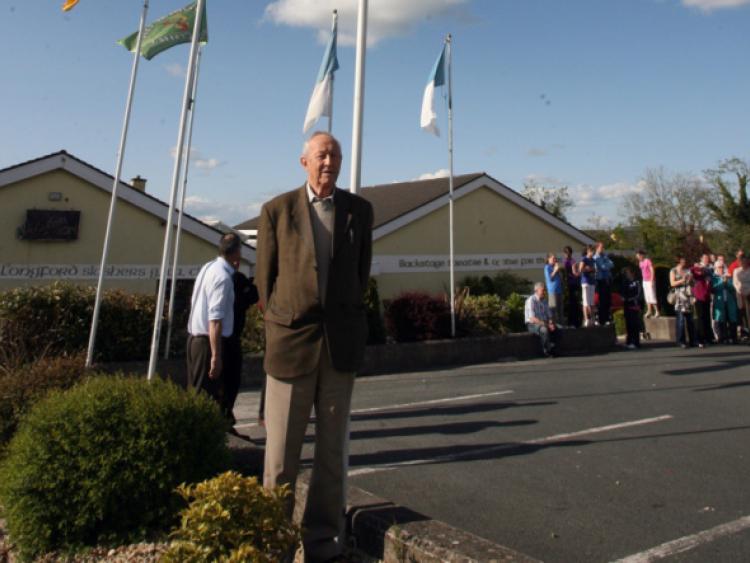 The Longford Slashers club is today paying its final respects to one of its founding members and one of the great Longford businessmen, Noel Caslin.

The Longford Slashers club is today paying its final respects to one of its founding members and one of the great Longford businessmen, Noel Caslin.

The family owned takeaway and chipper on the corner of New Street and Earl Street is forever etched in the minds of so many youngsters who savoured its famed salty chips and delighted in the generous student specials.

The landmark eatery was a favourite with Longford families for so many years and was very much a Longford institution up until Noel sold the premises in the late 1990s.

It was at the end of 1953 that Noel Caslin and his good friend, Tommy O’Brien (RIP), set about the formation of a new senior club in the parish of Templemichael. In early 1954 their dreams were realised with the amalgamation of Longford Wanderers and Whiterock Slashers.

It was certainly an auspicious start and the club actually won the championship in their inaugural year and the final itself is remembered as being “especially robust!”

The past year had seen Noel and his devoted wife, Eileen, earnestly researching the history of the club to mark this its 50th anniversary year. They were regular weekly visitors to the Longford Leader offices to research old papers and we will miss those weekly visits. Its eventual compilation will be a fitting testimony to his great work and vision.

All his life, Noel passionately promoted Longford Slashers, whether it was in his role as Chairman, Secretary, Treasurer, President and especially as a player where he excelled at both club and county levels. Several family members played with distinction for the club and county.

His keen entrepreneurial sense proved invaluable to the club and he was the driver behind firstly purchasing a site for club grounds where the Wessel and Cameron factories are now in Farneyhoogan from the Durkin family.

It was in 1977 then that he led the purchase of the lands for the current grounds from Michael Murray for the sum of £18,000 and the grounds were opened in 1979.

All his life, he was a larger than life character who was quick to face down adversary and seek out opportunity. He was a warm hearted and gregarious man and his great passions included music and dancing.

He was the driving force behind Slashers famed Carnival fundraisers in the 1960s which went head to head with the then emerging dancehalls. The legendary carnivals were a huge part of the club’s fundraising drive and very much part and parcel of the Longford summer. They ran for 15 years at a number of different venues – the old Fair green (now Mollaghan’s furniture store); Deanscurragh (now a housing estate) and finally the site of the old swimming pool, which was demolished last year.

His great goal was to have a home that Longford Slashers could be proud of and as it stands today it is a wonderful legacy to himself and fellow club founder, Tommy O’Brien, with both no doubt reminiscing with gusto up above as we speak.

He was a great motivator who always strove to bring people with him and proved to be a strong and resourceful leader when he oversaw the completion of the club’s state of the art clubhouse and grounds. He was also hugely enthusiastic about the ‘Backstage Theatre’ at Longford Slashers.

Whilst we forever associate Noel with Slashers and Longford, it surprises many to learn that he was a native of Rooskey in Co Roscommon and actually played minor for Roscommon in 1949 and ’50. He was inspired by the great Roscommon junior and senior teams of the 1940s and fondly remembered cycling the 22 miles to Roscommon town for the minor trials.

He came to Longford in 1950 to work with his uncle who had Cox’s bar and grocery on Ballymahon Stret. He quickly cultivated an entrepreneurial spirit and soon after launched his own fruit and grocery run. Some years later then he launched the famed family restaurant.

He quickly made Longford his home and was picked for Longford juniors in 1950 and then the following year saw him graduate to the county senior team where he played with them for eleven years.