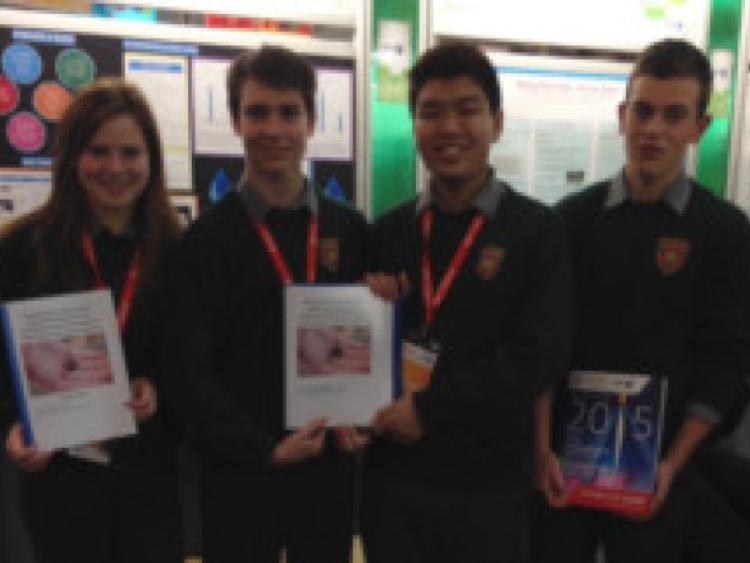 Staff and students of Lanesboro Community College were celebrating this week after fourth year student Mark Lyons was named first in his category at the prestigious BT Young Scientist and Technology Exhibition.

Staff and students of Lanesboro Community College were celebrating this week after fourth year student Mark Lyons was named first in his category at the prestigious BT Young Scientist and Technology Exhibition.

Mark’s project, which was one of four from Lanesboro Community College, was entitled, ‘€2.50 too much? - A statistical analysis of the effect of the GMS fee’.

There was further good news for the school as Conor Walton, Jeffrey Kok, Chloe Kenny, and Evan Tynan were highly commended for their project; ‘Development of a risk model to determine the expansion and potential environmental impacts of Asian clams in lower Lough Ree’.

Speaking to the Leader after the exhibition, Vice Principal of Lanesboro Community College, Michael Lyons, said, “I’m delighted for the school and the students involved.”

Adding that it was “a pretty big achievement”, a thrilled Mr Lyons went on to commend the students for the amount of work put into their projects.

“They’re a credit to themselves, to their teachers and the school, and also to their families,” he continued.

Mr Lyons also went on to say that the students’ enthusiasm, positivity and eagerness to build a brighter future, particularly in difficult times, “really does lift your heart as an educator, as an adult, and as a parent”.

Stating that the exhibition was an excellent resource for the education of young people, Mr Lyons concluded by saying, “I have to compliment and acknowledge the work of my fellow teachers, in this school and in schools throughout the country”.

Overall, it was a hugely successful year for Longford in the BT Young Scientist and Technology Exhibition. There were eight local projects among 550 qualifiers in the 51st annual exhibition.

Lanesboro’s Brian Lyons examined the effect of parental involvement in education, while his fellow schoolmates Rebeka Stavuse and Oran Walton looked into safe methods of getting to sleep.

Chloe Keaveney, Eireann O’Leary, and Carol Shirren represented Templemichael College with a project on road safety in Longford, entitled, ‘Round the Twist’, while Emma Donohoe, Chloe Murtagh, and Jack Kenny from Mercy Secondary School, Ballymahon, presented their project, ‘The Construction and Testing of a Differentiating Smoke Detector’.

Aideen Donohoe, Nicole Singh and Kaitlyn Baxter investigated the type of exercise that has the greatest effect on mental health. Patrick Farrell, James Gavigan, and Conor Flood, meanwhile, looked into the world of grinds.

Longford was also well represented at the opening ceremony, as Granard musician Joe Regan took to the stage as part of State Lights, who performed for the crowds gathered at the RDS.