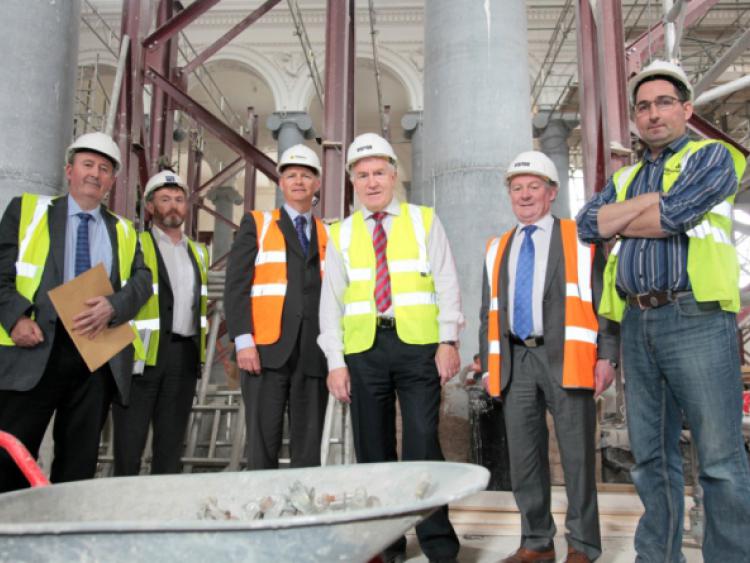 “We put down that we wanted a functioning Cathedral for the fifth anniversary of the fire and we’re on track to do that.”

“We put down that we wanted a functioning Cathedral for the fifth anniversary of the fire and we’re on track to do that.”

Cllr Seamus Butler spoke to the Leader as the Minister for Arts, Heritage and the Gaeltacht, Jimmy Deenihan visited St Mel’s Cathedral. Cllr Butler admitted that though they had set themselves a difficult task, all involved with the project are confident that the Cathedral will host Mass on Christmas Eve 2014.

At the moment, the barrel vault ceilings are complete, with a number of the Stations of the Cross in place. The most visible change to passers-by came last week, when the scaffolding was taken down from the spire of the Cathedral.

There is, however, plenty of work to be done before the Cathedral opens, and as that continues, attention has turned to talk of Mass on Christmas Eve.

RTÉ will broadcast Mass live from St Mel’s Cathedral on December 24 this year. With thousands of people passing through the Cathedral for last year’s open day, there have been concerns about how crowds will be managed.

It’s a task which Fr Tom Healy has bravely taken on, as he explains that it will be done as fairly as possible.

“We want people to feel equally welcome,” Fr Healy stated, adding that seats will be given on a ‘first come, first served’ basis. It is also hoped that the Cathedral will be open to allow for visitors on the previous weekend.