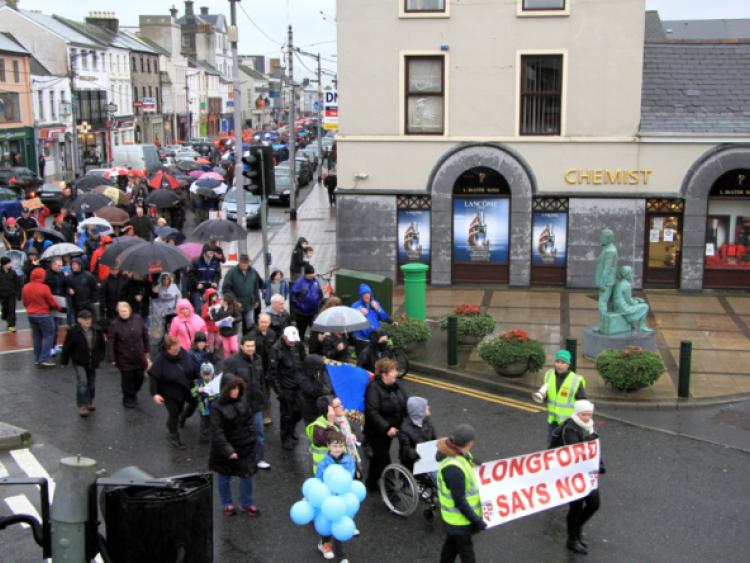 This was the simple and defiant message that was delivered in no uncertain terms by up to 2,000 water charge demonstrators in Longford at the weekend.

From early afternoon the crowds began to assemble along the county town’s main Battery Road, many brandishing placards, while others simply gathered with quiet determination.

They came from all over the town and the county, both young and old, in buggies, wheelchairs, and on foot.

They kept a tight hold of their placards and their umbrellas, for the day that was in it.

And as the rain began to fall in ever increasing velocity, so too did the cries of ‘No way, we won’t pay’.

For many of those watching from afar, it carried many similarities to the St Christopher’s Services protest of four weeks earlier.

It was a resemblance organiser and local woman Tena Keown alluded to as she hit out at the charges thousands of families across Longford now face.

More specifically, she questioned how businessman Denis O’Brien had been allowed assume control of Siteserv - the company which recently secured State contracts to install meters for Irish Water.

In what had been billed as a ‘non-political event’, Ms Keown said she was disappointed to see just two local representatives, Cllrs Mark Casey and Gerry Warnock, join the protest.

“I had emailed all 18 councillors requesting they join the march as individuals and leave the politics out for one day, but sadly none were brave enough to go against their party,” Ms Keown said.

Ms Keown, who told the crowd she had in fact sent not one but two Irish Water registration packs back to the utility company, said the occasion had underlined the wave of public anger over water charges.

“There was a motto we used to use at a youth club I was with, which read: ‘United we stand, divided we fall’. If we all stick to that, we can win this battle,” she said.

“The people of Longford have spoken. Enough is enough.”

Cllr Mark Casey and Cllr Gerry Warnock also spoke on the Market Square and both received a resounding applause from the participants at the march.