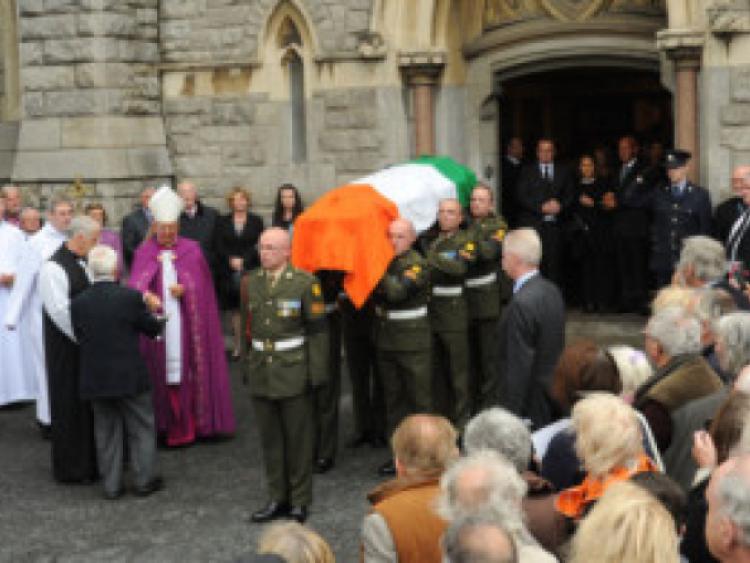 In Longford this week, Bishop of Ardagh and Clonmacnois, Francis Duffy led the local tributes to the late Albert Reynolds.

In Longford this week, Bishop of Ardagh and Clonmacnois, Francis Duffy led the local tributes to the late Albert Reynolds.

He said Mr Reynolds’s tireless work during his 30 year stint in public office would be forever etched in the memory.

“Albert Reynolds will be remembered locally as a committed and sensitive politician who made a real difference to the lives of his constituents in our community and economy.

“As a talented politician Mr Reynolds played a significant role in the political life of this country,” he said.

Longford-Westmeath TD Robert Troy said he had many wonderful memories of Mr Reynolds.

“My memories of Albert are more personal,” he fondly put it.

“One of my most vivid memories and one of the events that first sparked my interest in politics was when, as a young boy, I travelled with my family to see Albert’s return to the constituency after being elected Taoiseach in 1992.

“The pride and joy at his success, across all political backgrounds, was a mark of the esteem in which he was held and stands out in my memory as testament to what strong and honest political leadership can achieve.”

Candor was a quality Labour’s Willie Penrose said Mr Reynolds had in spades.

“He was somebody who could always act as an honest broker to bring people together,” he said.

“Albert Reynolds was a very affable, generous and decent person.”

Ms McFadden said she was especially proud a former constituency TD had played such a crucial role in the Northern Ireland Peace Process.

Mr Bannon, meanwhile, described Mr Reynolds as a “good and decent man”, who despite their political differences never flinched from his public responsibilities.

“Albert was a political figure of extraordinary integrity and courage,” he said, as he recalled a civic reception held in Mr Reynolds’ honour upon his promotion to Taoiseach in 1992.

“I was Mayor of Longford (at the time),” said Mr Bannon. “He contributed much to community life in the midlands and throughout the country and there is no doubt that he enriched the lives of those who were lucky enough to known him.”

“I had the pleasure of serving with Albert on Longford Co. Council until October of 1979 when he was then appointed Minister of Posts & Telegraphs,” he said.

Another Fianna Fail member and County Councillor, Seamus Butler, said the party had been left shattered by Mr Reynolds’ death.

“Albert was a one-off, an icon,” said Cllr Butler.

“People will forget he was finance minister from ‘88 to ‘91 at a very difficult time and he helped lay the foundations for the recovery of our economy.

“He was also Minister for Posts and Telegraphs when our communication system wasn’t the best. It could take up to a year or more to get a phone, yet he modernised the whole thing,” he said.

Equally, County Councillor Padraig Loughrey said there was no denying the imprint Mr Reynolds had made, both at local and national level.

“His commitment to Longford and Ireland was immense in particular the whole peace process,” he said.

“We are extremely proud of his contributions to the island of Ireland in particular the peace process and to County Longford.”

Sinn Fein spokesperson for the Longford Municipal District, Barbara Smyth agreed. She said Mr Reynolds’s inclusive approach to the peace talks was an all too rare feature in today’s political spectrum.

“I believe the fact that he served as Taoiseach for less than three years was a big loss to this country and indeed this region,” he said.

Longford business consultant James Morgan said he had been taken by Mr Reynolds’ ability to step between the world of business and politics with unerring ease.

“I am particularly struck by the amount of eulogies emphasising how his practicality and network building ability borne from his business background translated so effectively into the political arena,” he said.

More coverage and tributes in this week’s print edition of the Longford Leader.