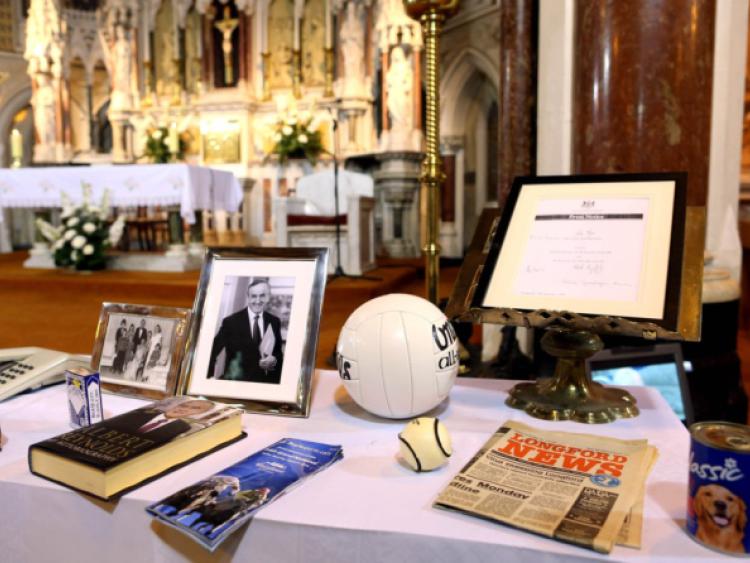 Thousands of people turned out this afternoon to say goodbye to former Taoiseach Albert Reynolds at his Funeral Mass in Donnybrook.

Thousands of people turned out this afternoon to say goodbye to former Taoiseach Albert Reynolds at his Funeral Mass in Donnybrook.

Mr Reynolds will be laid to rest at Shanganagh Cemetery in Shankill within the hour.

During his funeral Mass, the congregation heard about the businessman’s family, political and business life and how his peacemaking skills led to a ‘better Ireland’.

The former Taoiseach’s grandchildren brought symbols that reflected their grandfather’s life to the Altar. Among the symbols was Albert Reynolds’ Freedom of Longford scroll, the Longford News newspaper, a copy of the Downing Street Declaration, a deck of cards and a tin of dog food from his pet food plant in Edgeworthstown.

During the homily, Fr Brian D’Arcy who was a personal friend of the former Longford/Westmeath TD paid tribute to the late Taoiseach’s efforts to broker peace in Northern Ireland and reminded all those present of the love Mr Reynolds held for his wife and family. “On the night he was elected Taoiseach, I said Mass in the Reynolds’ family home and Albert said to me, ‘Brian before I leave this office I will have peace in the North’,” Fr D’Arcy added. “If it wasn’t for Albert we would still be killing one another.”

Archbishop Diarmuid Martin also spoke about Mr Reynolds’ “committed, Christian life” before reading out a telegram from Pope Francis 1, who said, “I recall with gratitude the late Taoiseach’s effort to promote peace and reconciliation in Ireland”.

In a glowing tribute to her father, Andrea Reynolds spoke about the ‘core life lessons’ that he taught her and to ‘never fear failure’. She then recited words from a speech made by President Roosevelt in 1910 entitled ‘Citizen in a Republic’ .

In conclusion, in his Eulogy, Philip Reynolds said of his late father, “In dad there was that honesty; a deep genuine goodness. To him success was important because it was an endorsement of the principles by which he lived and his reason to keep going.”

The late Albert Reynolds will be buried with full military honours shortly.