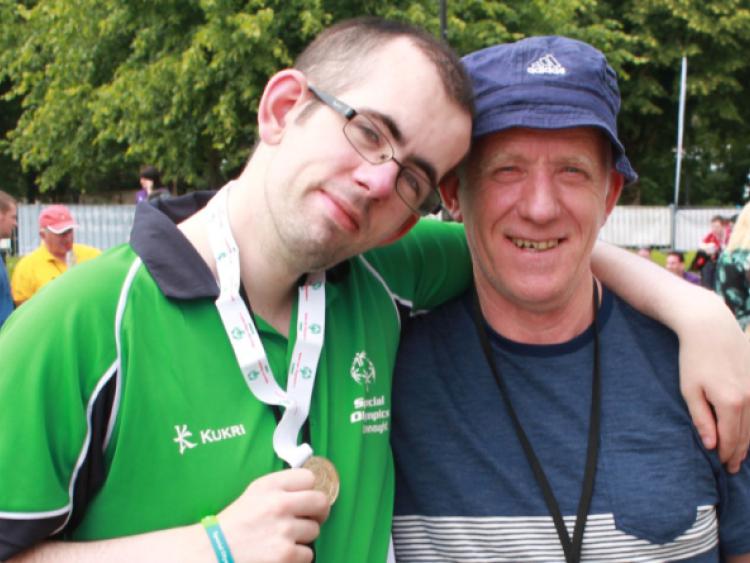 A Longford athlete was denied a gold medal despite finishing in first place in the final of a 25-metre freestyle swimming event at last weekend’s Special Olympics Ireland Games in Limerick.

A Longford athlete was denied a gold medal despite finishing in first place in the final of a 25-metre freestyle swimming event at last weekend’s Special Olympics Ireland Games in Limerick.

In completing the race, 24-year-old Stephen Browne from Newtownforbes improved his time by 4.37 seconds over the previous round, placing him marginally over an improvement threshold of 20 per cent for his category, which is imposed in Special Olympics competitions in an attempt to promote fairness.

“If he had taken just 4.3 seconds off his previous time, he would have kept the medal,” his coach, Liam Madden, said.

“How are you supposed to train him for that? Tell him to slow down?

“The Special Olympics is not about limitations, it’s supposed to be about what you can achieve.

“I’ve had swimmers disqualified previously for technical reasons, such as performing the wrong stroke, but this is different.”

Mr Madden went on to say that he has been training Stephen since last October and had been keeping a log of his times, which he submitted as a record at official events.

“He had reduced his time from 40 seconds down to 26 seconds,” he continued. “Stephen had been putting in an absolutely enormous effort.”

At Special Olympics Games, contests are separated into divisions based on previous times, with a maximum improvement rate of 20 per cent allowed.

The purpose of this is to promote honesty of effort at all stages of qualifying.

Mr Madden added that Stephen had a “bad day” in an earlier round, which could have been a factor, but also said: “It’s possible to put a great performance on a given day. He was disqualified because he exceeded expectations. Stephen is as honest as the day is long and he’s a lovely, lovely guy.” He likened the incident to, “having a penalty awarded against you in the last minute of extra time. The issue [of divisioning events] has been festering for some time but no one will address it.”

Stephen did pick up a silver medal in the 25-metre freestyle relay event, which saw him team-up with fellow Longford athelete Patrick Hickey, but missing out on a gold medal means he will not be considered for the team to represent Ireland at the World Games in Los Angeles.

The swimmer’s father, Paddy Browne, explained that, “Stephen wasn’t able to comprehend that he had swam too fast after being pushed to go faster since last October.

“He wants to keep going [competing in Special Olympics competitions] but I would be reluctant to see him competing again if there’s a chance he could be disappointed like that again. That’s not the way it works in real life.”

Mr Browne told the Longford Leader that he and his wife Bernie had travelled down to Limerick with his daughter and stayed for the weekend so they could support Stephen, and that the outcome was disappointing.

When contacted by this newspaper, a spokesperson for Special Olympics Ireland explained: “In official competition there is an allowance for improvement in athlete times of 20 per cent. Athlete coaches had the opportunity to update athlete times up to the 23rd of May. Also, on the first day of competition coaches had a further opportunity to update times, 30 minutes after divisioning events.

“This is done to ensure Special Olympics Ireland has the fastest available time for finals, that each and every athlete is given the fairest opportunity in their chosen event, and finally to ensure that the scores and results are as accurate as possible.

“Event results are not official until the referee has signed them off. In accordance with the rules governing Special Olympics Ireland sporting events, no medal was awarded in this case and the athlete was subject to a DQ (disqualification).”