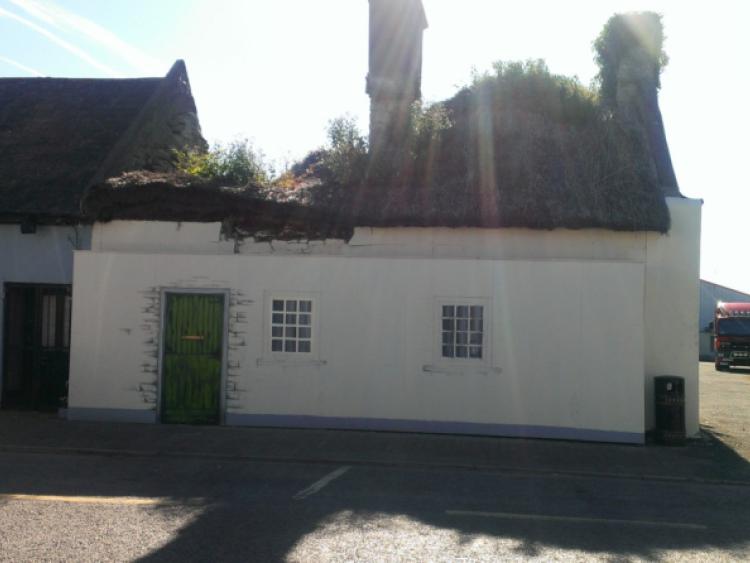 Two connected court cases regarding a derelict thatched cottage in the centre of Kenagh got a hearing at last week’s sitting of Longford District Court.

Two connected court cases regarding a derelict thatched cottage in the centre of Kenagh got a hearing at last week’s sitting of Longford District Court.

In the first case, Frank Fallon of Lisduff, Ardagh; Noel O’Brien Kiltoom, Athlone and Phelim Helivan, Rath, Ballynacarrigy were all named in the action taken by Longford County Council.

The Council initiated the legal proceedings alleging that the named defendants failed to comply with a notice served under section 59 of the Planning and Development Act.

Solicitor Mark Connellan, acting for one of the Section 59 notice parties Frank Fallon, said his client had been looking to sell the property, but that AIB had a decree on the property and that it was in fact “one part of a bigger picture”.

Judge Seamus Hughes asked what the property would realise if it went to market in its current condition. Solicitor for Longford County Council, Frank Gearty, agreed with the judge’s suggestion that it would be in the region of €20,000.

Judge Hughes asked: “And the decree is for a multiple of that?” Mr Connellan said that the judge could “add a zero”.

Mr Gearty said that measures could have been taken to prevent it from falling into a dilapidated state.

Mr Connellan told the court that it was a matter of some complexity.

Judge Hughes said that he felt compelled to take a certain course of action and that AIB Bank should be involved in the process to ensure that the matter was moved along.

In his determination of this case, the judge said that although the situation is hampered by the bank he would still have to convict the three named defendants of the breach of the Planning Act. He adjourned the matter to July 15 for sentencing.

In a separate action by the local authority against Breege Cassidy Interiors for the non-payment of rates, Mr Gearty said that the business was adjacent to the thatched property. Mr Gearty told the court that the Ms Cassidy had come to prominence for her work on the home of the then Taoiseach Albert Reynolds in Dublin.

He said the council accepted that her business had been affected by the thatched property falling into disrepair, but nonetheless rates were owed to the local authority.

Judge Hughes said that the cordoning off of the footpath that had taken place around the thatched dwelling had effectively halved the potential footfall. He said that the barrier also had a negative aesthetic effect on the business.

Judge Hughes said that the defendant would have to meet the local authority half way and suggested paying half the annual rates bill.

Mr Cassidy said that he would be amenable to the payment if it was in full and final settlement.

Mr Gearty said that the matter before the court does not include the rates for 2014.

The legal representative for Longford County Council went on to say that not only was the ratepayer the victim in this scenario, the wider community of Kenagh had suffered as a result of the blot on the landscape of an otherwise beautiful village.

Judge Hughes adjourned the matter to July 8 to give the business owner an opportunity to make a payment towards the rates bill.