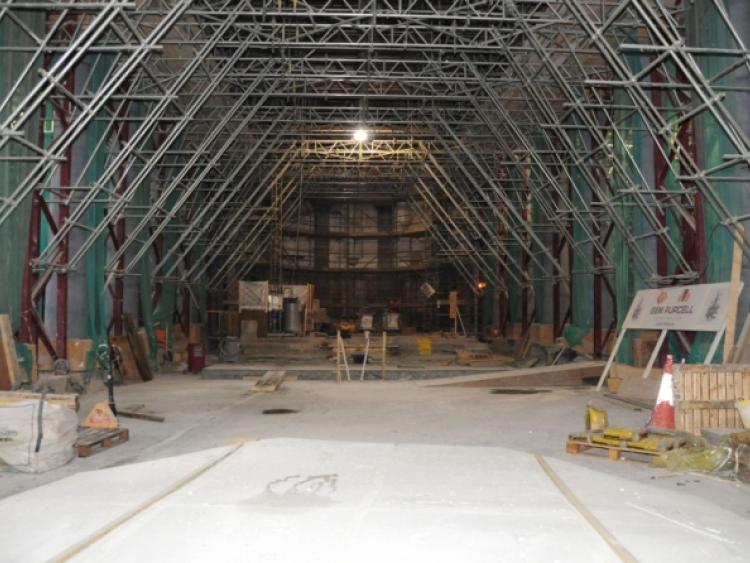 With less than a year to go before St Mel’s Cathedral is due to reopen, the team behind the restoration are working hard to ensure they reach their deadline.

With less than a year to go before St Mel’s Cathedral is due to reopen, the team behind the restoration are working hard to ensure they reach their deadline.

Site Project Manager Ronan Moore explains that though there will be a lot of long hours put in before the Cathedral reopens, he is confident that on Christmas Eve 2014, Mass will be celebrated in the iconic building. “We’ve got the team, we’ve got the will and we’ve got the skill” he adds.

Though visibility is somewhat obscured from the outside, inside the gates is a hive of activity, with people of all trades and professions working on the restoration.

Tasks currently being carried out include plastering the barrel vault ceiling and side aisle ceilings, erecting a scaffold to the bell tower for works there, and creating the steel structure for the new organ, amongst many others.

As the deadline looms, new and exciting milestones are also being reached. Next week, Ronan explains, some of the scaffolding will be taken down to expose the barrell vault ceiling for the first time since 2009. At the end of February, it is hoped that the new altar will be brought in. In March, Piero Ruffatti, the man in charge of designing a new organ for the Cathedral, will visit and the baptismal font will arrive.

In the following months, the first of the stained glass windows will arrive, and works will be completed on the lift structure and flooring, while the organ will arrive in the Autumn, ready to be tuned.

Since Ronan has started to work on the restoration, he reckons that approximately 300-350 people have worked on the project. Though workers have come from all ends of the earth, there is still a very high percentage of locals working on or contributing to the Cathedral’s restoration. Ronan explains that he tries to keep track of local involvement. At one point in the restoration, 70% of those involved were local, while the level currently lies at more than 60%.

Ronan admits that there will be mixed emotions when the Cathedral reopens, adding that it’s easy to form an attachment to the building and the people working on the project.

Commuting each day for work, Ronan says he has been trying to calculate how many miles he will have travelled by Christmas Eve 2014. The Site Project Manager explains that he will have hit just under 90,000 miles, laughing, “Anyone that says they’ve travelled a long way to be there, I’ll say I travelled further!”