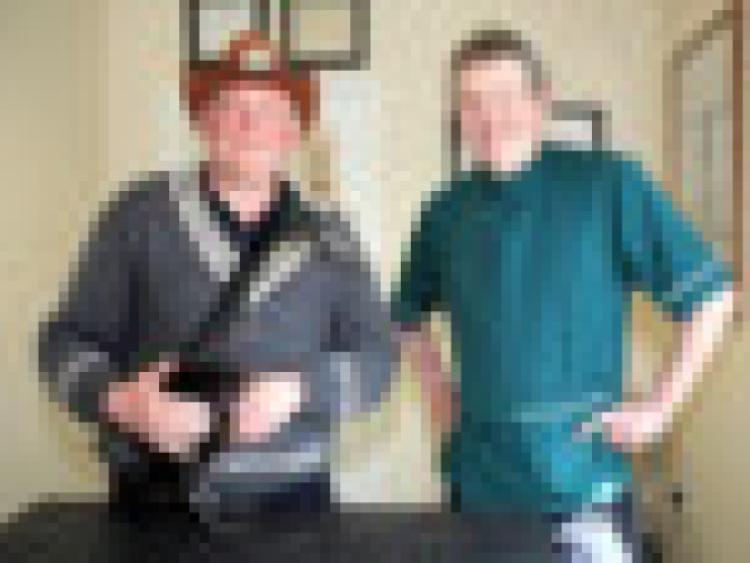 Hannabal Hayes, a 12-year-old drake belonging to Radio DJ M.C. Hardcastle has made a miraculous recovery after an accident that threatened his life.

Hannabal Hayes, a 12-year-old drake belonging to Radio DJ M.C. Hardcastle has made a miraculous recovery after an accident that threatened his life.

On April 9th last, Hannabal Hayes, whose name comes from 1970’s television programme “Alias Smith and Jones”, suffered an accident which resulted in a badly broken leg. With an injury like that, animals such as hens and ducks are usually put to sleep. However, having had his pet for 12 years, M.C. Hardcastle was reluctant to let that happen.

Mr. Hardcastle took Hayes to Crandara Veterinary Clinic, Dublin Road Longford, where he had taken a number of his pets before – many of which lived to a very old age. Vet James Victory had a look at the injury and was at first doubtful, suggesting that the duck should be put to sleep. “The bone of the drake is only covered in scaly skin”, he explained. “It’s very difficult to heal and to get blood to the healing point.” However, James decided to take a chance, and instead of putting the duck to sleep, he elected to perform a surgery on Hayes’ leg, inserting pins to help the bone heal.

The surgery, usually performed on small dogs who suffer a break, involved making two small holes either side of the break. Orthopaedic tungsten pins were then inserted before being bound together with plastic cement or putty. The results were astounding.

“I was amazed” said James, having seen the drake again on May 2nd. “The duck is responding well and has no limp.” He continued: “It would have been much easier if the duck was younger – as we age the healing powers and abilities decrease. That made it more difficult and more miraculous that it worked.”

Both men are delighted with the outcome of the surgery, as they don’t believe that it has ever been carried out on a duck before. M.C Hardcastle was visibly thrilled as he proudly watched Hannabal Hayes walk around as though he had never been injured. “Up to date Hannabal Hayes is out and about walking again as good as ever at 12 years old,” Mr Hardcastle beamed, “thanks yet again to the wonderful hands of James Victory.”