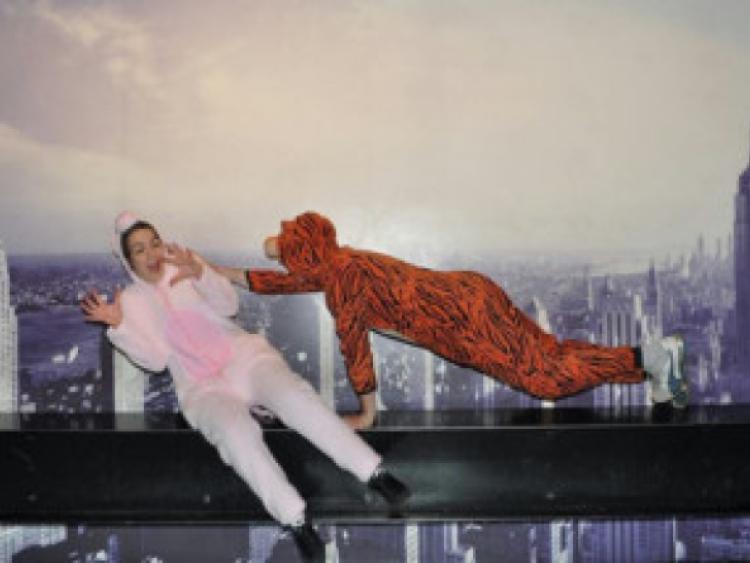 On a recent trip to New York, Ballymahon girl, Jessica Thompson decided to see the sites in a slightly different way than most, leaving a lasting memory on New York City.

On a recent trip to New York, Ballymahon girl, Jessica Thompson decided to see the sites in a slightly different way than most, leaving a lasting memory on New York City.

Jessica and her boyfriend John Mulry from Galway visited New York to celebrate their anniversary. As it was Halloween they took the opportunity to dress up in onesies in order to blend in with the more colourful characters in the city.

Jessica rationalised their reasons for the outfits; “It was Halloween, so it wasn’t a spur of the moment thing. They don’t have Penney’s over there, so they wouldn’t have had animal onesies like ours and we thought it would be hilarious to wander around New York City dressed as a pig and a tiger. Nobody knew us, so we felt no shame or embarrassment. It was a bit of fun and we really enjoyed it. There’s a huge Halloween parade in New York every year and we had planned to go along. We didn’t want to be running back and forth to the hotel so we decided we’d stick on our onesies and finish our site-seeing so we could go straight to the parade”.

During their visit to some of the most famous monuments and buildings in the world, the couple themselves became a tourist attraction being asked by other tourists to pose for photographs. “They loved us. People were asking us if they could take pictures with us. Others were asking directions to the parade – we were dressed up, so they naturally assumed we were part of the parade. There were people taking sneaky pictures of us when they thought we couldn’t see them. Others smiled at us when we passed them. People turned to stare. It was a lot of attention that I’m not used to but it was hilarious.”

This photograph documenting their exploits made it onto the wall of fame in the Rockefeller Centre. “On the way up to the top of the Rockefeller building, there’s a photographer who takes photos of the tourists against a New York background – they sit on a beam so it looks like they’re hanging over the city.”

“We were the only people dressed up so they were delighted and the photographer was telling us poses to do and next thing he just shouted “And then the tiger ATTACKS!” So John pretended to attack me, everyone laughed and we went on our merry way, assuming that it was just another photograph to them.”

“The rest of the staff loved us too. The people in charge of the elevators were joking; “Only people who are in fancy dress are allowed to ride the elevator tonight.” They loved us. Other tourists were laughing at us and taking photos and one girl said “you guys are so cute!” When we got back to the ground floor and wandered into the gift shop, one of the shop assistants said to the other “Hey look it’s the tiger and the pig!” as if he knew us. Word had clearly travelled.”

“Then they said “You guys made our wall of fame!” and pointed to a load of framed photographs that were on shelves on this so-called wall of fame. There were loads of good pictures but ours was right in the middle – the one where the tiger attacks.”

“Then one of the guys said “The last time we had a tiger in here was years ago” and he pointed to a very bored-looking guy sitting on the beam in a tiger onesie. They’ve never had a pig though”.