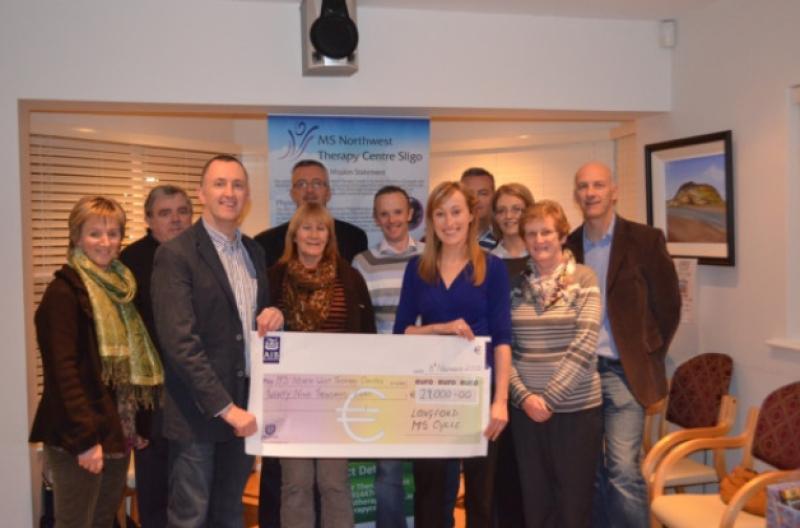 Organised by the Considine family; Eamonn, Sean, Brendan, Donal, Dearbhla and Rosemarie, the cycle is in aid of the MS Northwest Therapy Centre in Sligo, a centre which allows those with multiple sclerosis (MS) to undergo a variety of treatments, including physiotherapy, counselling and reflexology. Indeed a very worthy cause, and a cause close to the hearts of the family, as in 1992, Eamonn was diagnosed with MS.

“August 1992 I was diagnosed” Eamonn explains, “and thankfully I’ve led a mostly healthy life.” Speaking to the Leader last week, Eamonn, who had experienced symptoms from as early as 1990, admitted that the diagnosis was “a shock”. “Before I was diagnosed, my perception of MS was a wheelchair” he says.

Eamonn credits his wife and family for their amazing support after his diagnosis, and advises those who have received the same diagnosis to take time off initially, and to talk to their friends and family. Eamonn is also keen to point out that every individual case is different, and that should a person need it, there are support groups available. His biggest piece of advice is to stay fit. “Keep your body strong. If your body is strong, your mind can stay strong. Mentally it affects you as well as physically” he says.

Eamonn discovered the MS Northwest Therapy Centre in 2008, and hasn’t looked back since. “Physically, I wasn’t feeling good, mentally I wasn’t feeling good” he admits, but now, five years on, Eamonn says that meeting people there and the amazing staff have helped him to cope.

Last year, 178 took part in the cycle, and the total raised was almost €30,000, a figure that the family are hoping to reach or maybe even exceed this year. “They (the centre) are building a 5-bed respite centre” Eamonn explains. He hopes that the funds raised in the cycle can help with the building and furnishing of the respite centre. The cycle is also aimed at raising awareness, and Eamonn hopes that along with that awareness, it could also lead some to a diagnosis. “Not knowing what’s wrong with you is tough” he admitted, but explained “it could have been a worse diagnosis”.

The MS Cycle 2013 will see cyclists travelling from Longford to Carrick-on-Shannon and back, a distance of 65km. Registration will take place in the Rugby Club from 9-10.30am. At 10am, less experienced cyclists will take off, while those with more experience will set off at 11am. The registration fee is €30, or sponsorship cards are available from any of the organisers. Refreshments will be served at Trailblazers, Carrick-on-Shannon, and showers and dinner will be provided after the cycle at the Rugby Club. The family are looking forward to the event, and Eamonn happily reports that last year, people “were raving about how well it went and how much fun they had”.