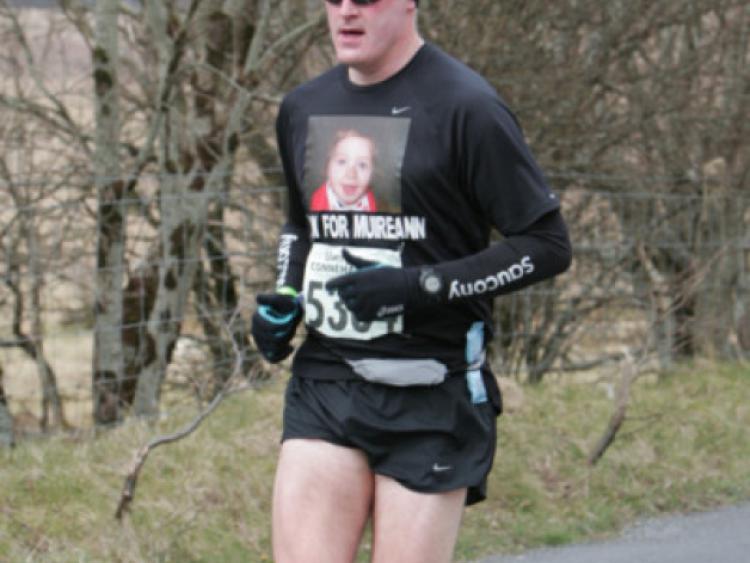 A Lanesboro man is making preparations to undertake an epic run as part of his attempts to raise €100,000 for charity.

A Lanesboro man is making preparations to undertake an epic run as part of his attempts to raise €100,000 for charity.

Declan O’Flaherty, who now lives in Athlone, will take on a 48-hour challenge during the October bank holiday weekend when he will run from the Shannonside town to Temple Street Children’s Hospital in Dublin. And as if that wasn’t enough, the next day will see him taking part in the Dublin City Marathon.

“I’m raising the money for three charities: Temple Street Children’s Hospital, the Jack and Jill Foundation and the Brothers of Charity Services”, Declan, a solicitor with Tormeys in Athlone, explained. “All three have played an important role in helping us to care for our daughter Muireann, who has a rare condition called pontocerebellar hypoplasia.”

Declan has completed three marathons to date but the run in October will be his biggest challenge yet.

To help him prepare for the rigours of the long-distance run, Declan has enlisted the help of Gerry Duffy, who completed 32 marathons in 32 days.

“The thing that struck me most about Gerry was that a guy from up the road in Mullingar - he didn’t live in some far-flung corner shed in the rockie mountains and eat a plant-based diet - he was just an ordinary guy doing extraordinary things”, said Declan. “So that really was the incentive I needed to go and complete my first marathon.”

He has enlisted a dedicated group of people to help with the fundraising. “We have a large committee of about 15 people,” he reveals. “And there will be many other events to come, including a concert.”

A special website, www.marathons4muireann.com, will be launched tomorrow, Thursday, where the public can get information and donate. Contact Declan by email at info@tormeys.ie.