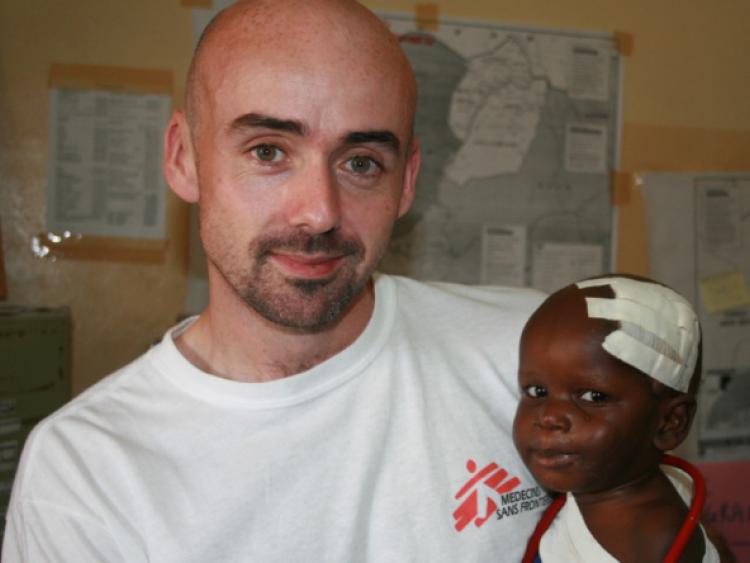 A two-year-old conflict has claimed the lives of more than 70,000 people in Syria, yet brave Longford doctor Declan Barry is ‘genuinely glad’ to be heading there.

A two-year-old conflict has claimed the lives of more than 70,000 people in Syria, yet brave Longford doctor Declan Barry is ‘genuinely glad’ to be heading there.

Prior to his departure for Akkrad in northern Syria where fighting has reportedly worsened, Declan modestly told the ‘Longford Leader’, “It is nice to have something to offer and to go somewhere where you know it is very, very needed.”

Son of Imelda and the late John Barry, St Mel’s past pupil Declan fondly recollected summer days playing in open competitions at the tennis club close to his home. Younger sister Emer is well known for her involvement with the church choir and his older brother Ronan lives in Brussels and he managed to spend some time with him prior to travelling to Syria.

He also visited his mum and remembered a mission to Libya where his Médecins Sans Frontières boss urged him to ring home. “I’d say I’m fine and they’d tell me it isn’t a question. MSF have a lot of experience, they know how to keep the Mammies happy!”

Declan received his primary education at St Joseph’s and St Emer’s, and pointed out how as a schoolboy he recalled Trocaire box collections held during the famine in Ethiopia. “I think we are a very charitable society. That whole concept is engrained into us all. I didn’t decide to become a doctor. I was initially going to do pharmacy. It was only after I left Longford that I decided to become a doctor. Both my parents were teachers as well so the whole career path was getting a lot of attention.”

Declan admits it is nearly twenty years since he lived in Longford as in 1995 he left to pursue his studies at Trinity College.

After his third year of medical school he decided to take a year out and went bag packing himself, following in the footsteps of his cousin Suzanne (Duffy). “It is a really big world and I’m a really small person and I wanted to see it and get an idea of it. I wanted to go all around the world by myself and my parents were horrified but I went anyway.”

While looking for directions in Ho Chi Minh City in Vietnam he saw a plaque in English and it said Christina Noble Children’s Foundation. He was asked if he was there to see the children and being an orphanage, he felt it would be bad manners to say no, so he said ‘yes of course’.

Declan added, “I was talking to Christina who had this really weird Dublin accent. She was magical to be around. I was there for four months and that was my first flavour of being a volunteer.”

It was after Declan graduated that he heard about MSF. “They won the Nobel prize in ’99 and it was after I graduated, somebody said it to me. I looked them up and I said this looked good. I stuck around in Ireland for quite a few years, you have to get your experience and make sure you have something to offer. I joined MSF in 2010.

“My first mission was to Uganda, then to Ethiopia and Libya and that was my first experience of a conflict zone and again I was really nervous that it wouldn’t suit me. But I needn’t have been. Irish people have something very specific to offer. We have a real good humour. We are grounded and practical and it is a wonderful attitude to have in a stressful context.”

Declan will be working as MSF’s Medical Team Leader in Akkrad and he said there was never an occasion where he feared for his own life. “That hasn’t happened yet. I’d be an idiot to say it couldn’t possibly happen. We have a team that look into security all the time.”

The MSF team have been in the Jabal Al Akkrad region since last September and Declan described the situation as being ‘vaguely stable’ although he wasn’t entirely aware how fractious things are.

He has encountered ups and downs. “For anybody in the medical profession, we don’t get used to it (the downs), but we have a way of processing it where it doesn’t actually swallow us up. It is upsetting but not to the point of debilitating us, it is kind of drives us to make a difference.

“But the feel good factor is great and we are going to areas that don’t have access to health care at all so the impact you can make is really massive. My first project was a malnutrition project and the children responded so well to it. HIV and TB, if you get people on treatment, the response is really good. In all my projects you get this sense of ‘wow’. We push really hard to get good outcomes.”

Declan had dinner with his sister Emer and cousin on the eve of his departure from Dublin airport and he is looking forward to the challenge.

“Specifically I am going to be there for nine weeks. I have to be back in September because I’m going to London to do a Masters in public health in developing countries.”

36-year-old Declan says he enjoys working with MSF and he would de delighted to meet young people who are considering a similar career path to him-self.

“Medicine is a great career in that you have something useful to offer to the world but I would say to youngsters do what makes you happy. That should be the only guide. If you are choosing to become a doctor know why you want to do it and I’d be delighted to meet them in the future.”