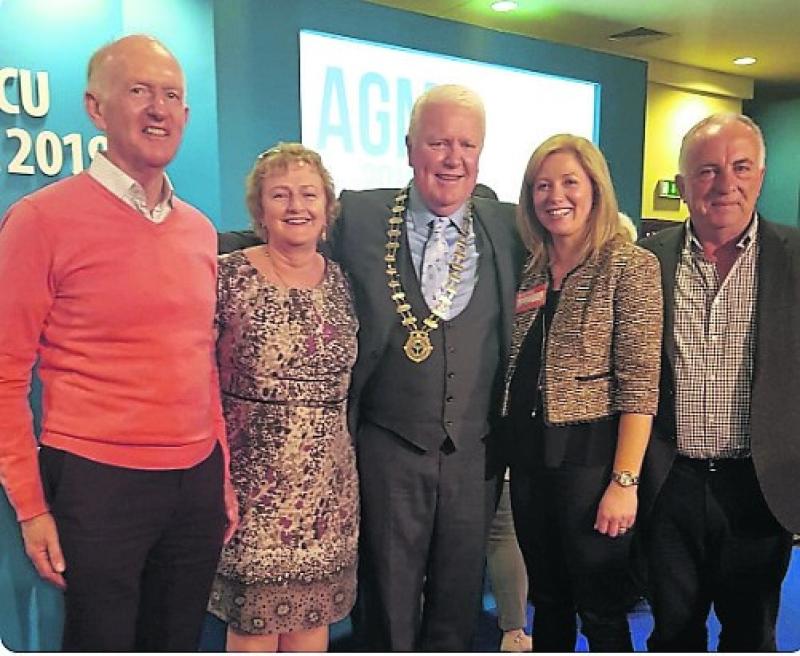 Gerry Thompson, pictured centre, at the recent AGM in Citywest, Dublin, where he was elected president PICTURE: ROSCOMMON CREDIT UNION

Gerry was formally elected at the AGM in the Citywest Hotel in Dublin on Sunday, April 28, having previously served as chairman of Lanesboro Ballyleague Credit Union.

Gerry is the son of Pete Thompson, who was a founding member of the Lanesboro Ballyleague Credit Union in 1965.

Gerry takes on the role from outgoing president, Charles Murphy, and will be helped out by newly elected vice president, Mr Eamonn his late father Pete Thompson and he also acknowledged the support of his wife Martha and his family.

Speaking of his new role, Mr Thompson said: “I am proud and humbled to be elected to this position and very much look forward to working with all our affiliated credit unions, and the broader credit union movement, as they continue to engage in the further development and diversification of services.

“As a firm believer in the massive potential of credit cooperation to improve people’s lives worldwide, I will work to ensure the unique credit union model of cooperative financial services continues to prosper across Ireland. I am proud of the ILCU’s all-island remit, and aspire to see credit union services ultimately become the first financial choice for all our citizens, both North and South.”

Mr Thompson will now lead a board of 12 other directors over the course of a two year term.