Fishing for peace of mind in Lanesboro 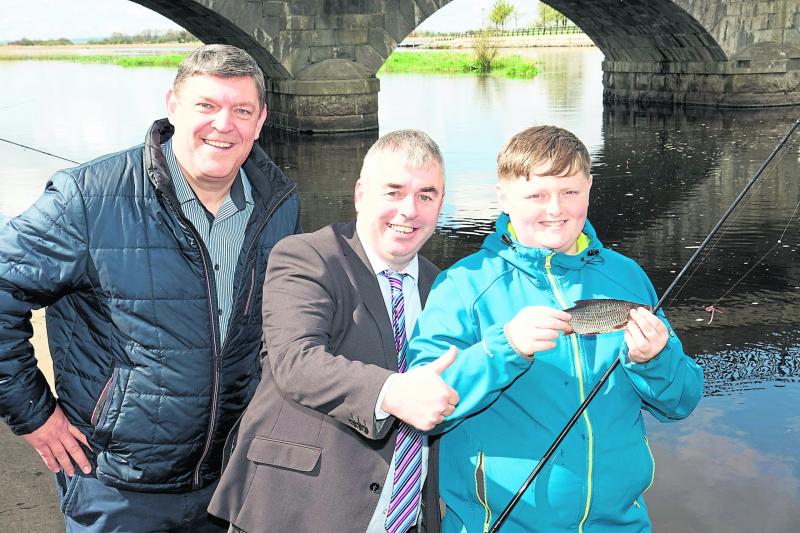 Last Saturday, Lough Ree Angling Hub hosted members of the Killinarden Youth Initiative for a day’s fishing along the banks of the River Shannon in Lanesboro.

And, what a day it turned out to be - the sun shone down on Lanesboro, the hot water stretch served up plenty of treats for the fishermen and women, and on top of all that, Minister for State at the Office of Public Works (OPW) Kevin ‘Boxer’ Moran dropped by and threw €50 into a pot for the biggest bag of fish at the end of the day!

Speaking to the Leader, Philip Gordon, Lough Ree Angling Hub said the initiative was run by a group of volunteers who coached kids in the Tallaght area in fishing, environmental skills and about how to appreciate nature and its surrounds.

“This group visit Lanesboro a couple of times a year and the local resource centre sponsors the food for them, so there is a real effort to bring two communities together and enjoy what’s on offer here in Lanesboro,” he smiled.

Meanwhile, Buddy Ryan one of the co-ordinators of the Killarden Youth Initiative said it all began about five years ago when a group of adults in the area realised that a big interest in fishing had begun to generate.

But, the problem now, he continued, is that there is no designated angling areas in Dublin - an issue that Buddy later raised with Minister Moran who chatted to the group for some time along the banks of the river on Saturday.

The Initiative in Dublin now has the support of the HSE, Probation Services, Tallaght Youth Services and a number of addiction groups, and as a result a programme has been put in place to assist young people in the area, and encourage them away from anti-social behaviour.

The fishing, adds Buddy is one such incentive.

Ethan Byrne, a member of the Killarden Youth Initiative told the Leader that he loved fishing.
He also said being part of the group helped him to make new friends.

“Coming down to Lanesboro helps me to get clear in my head,” he smiled, before pointing out that trips like this allowed him to focus better in school too.

“When you come down to the country, you can just chill out and that’s good.

“Also this gives us a new perspective on life.”

Meanwhile, Luke Mulcahy told the Leader that being part of the Initiative helped to “keep me off the streets and “away from all the bad stuff”.

“I have been to Lanesboro before and I like it here,” he added.

“I love the outdoors and I have made loads of friends too.

“Being part of all of this helps me to concentrate in school as well.”

Speaking to the Leader, Boxer added; “It’s great to see people coming down from Dublin to Lanesboro to fish and to see young kids involved in fishing”.

Minister Moran went on to say that he fished all his life and there was something very special about the ritual.

“It takes you out of harm's way; your mother and father know where you are and the kids are with each other enjoying themselves,” he continued.

“Well done to everyone involved in this.”