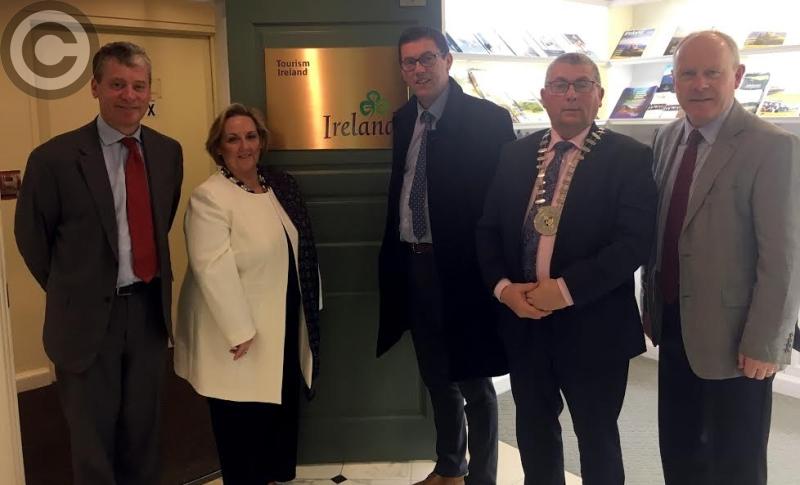 Representatives of Longford County Council, who are in New York for the St Patrick’s Day celebrations, met with senior executives from Tourism Ireland in New York yesterday.

According to the brief, Tourism Ireland aims to build on the success of 2016, which was the fourth record-breaking year in a row for Irish tourism from the United States.

Tourism Ireland is prioritising North America this year, as a market which offers a strong return on investment, in terms of holiday visitors and expenditure.

“Tourism Ireland is creating ‘stand out’ for the island of Ireland in the US, highlighting experiences like the Wild Atlantic Way, the Causeway Coastal Route and Ireland’s Ancient East.

“Promotions aim to grow travel to the regions of Ireland, during the shoulder and off-peak seasons.”

With the recent announcement by Norwegian of new flights to Ireland from New York (Stewart International Airport) and Providence (Rhode Island), the total number of transatlantic airline seats this summer will be 60,000, from 20 North American gateways to the island of Ireland – that is 10,000 additional seats (+20%) compared to summer 2016.

“We were delighted to meet with the representatives of Longford County Council and to have the opportunity to brief them about the extensive promotional programme we are undertaking in the United States this year,” Ms Metcalfe continued, before pointing out that the organisation’s ambition was to surpass the record-breaking performance of 2016 and to deliver a +9% increase in revenue and a +6% increase in visitor numbers from North America in 2017.

“St Patrick’s Day traditionally marks the real start of the tourism season for us; our aim is to bring a smile to the faces of people everywhere and to convey the message that Ireland offers the warmest of welcomes and great fun, as well as wonderful scenery and heritage.

“We are using every opportunity to capitalise on Ireland’s heightened profile this week; the saturation coverage about Ireland at this time of year – across the airwaves, in newspapers and digital media – is an invaluable boost for our overall tourism marketing drive in 2017.”