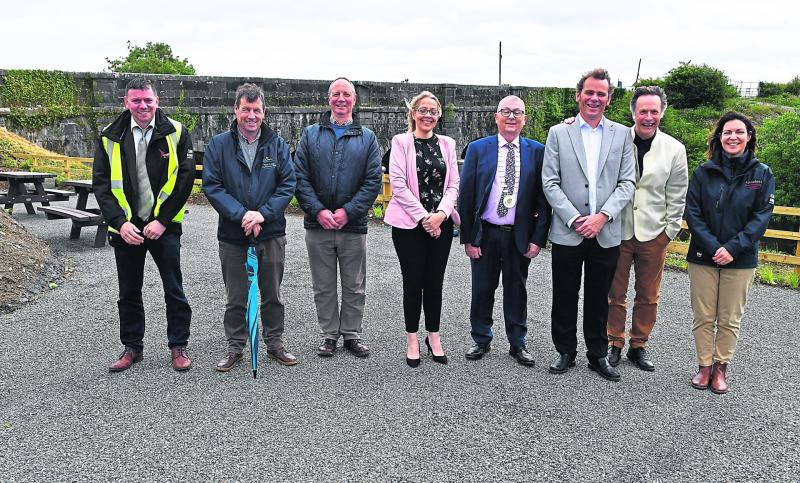 Local dignitaries at the official opening of Abbeyshrule's Whitworth Aqueduct

The 200-year-old Whitworth Aqueduct in Abbeyshrule became more accessible last week as a new viewing area was officially opened to the public.

Local councillors, members of the local community and representatives of the Irish Wheelchair Association were all present as Chairperson of Abbeyshrule’s Tidy Towns committee Philip Butler welcomed the new facility, which is fully accessible and provides a beautiful view of the aqueduct.

“This has to be one of the finest examples in the country of state agencies coming together to deliver a project inspired and led by our Tidy Towns,” said Cllr Cahill.

“CLÁR funding has made the impossible possible here at the Whitworth Aqueduct, providing much needed funding to ensure this project was brought to fruition.

“It enhances accessibility for all, not only to this historic and heritage built structure, but also to the Royal Canal Greenway and the environs of Abbeyshrule.”

According to renowned Irish travel journalist, Eoghan Corry, there is “an exciting future” for tourism in the midlands, Cllr Cahill noted.

“However, he has warned that “pulling it all together” will be essential to the area’s international visitor success. Accessibility for all is key to our future,” he said.

“It has opened up access to our local built heritage, the flora and fauna of the area in addition to linking in with the village itself,” said Cllr Cahill.

In order to successfully improve access to this historical aqueduct, it was necessary to address both conservation and accessibility needs in an integrated and balanced manner.

“This is one of Longford’s best examples of an inclusive environment.”