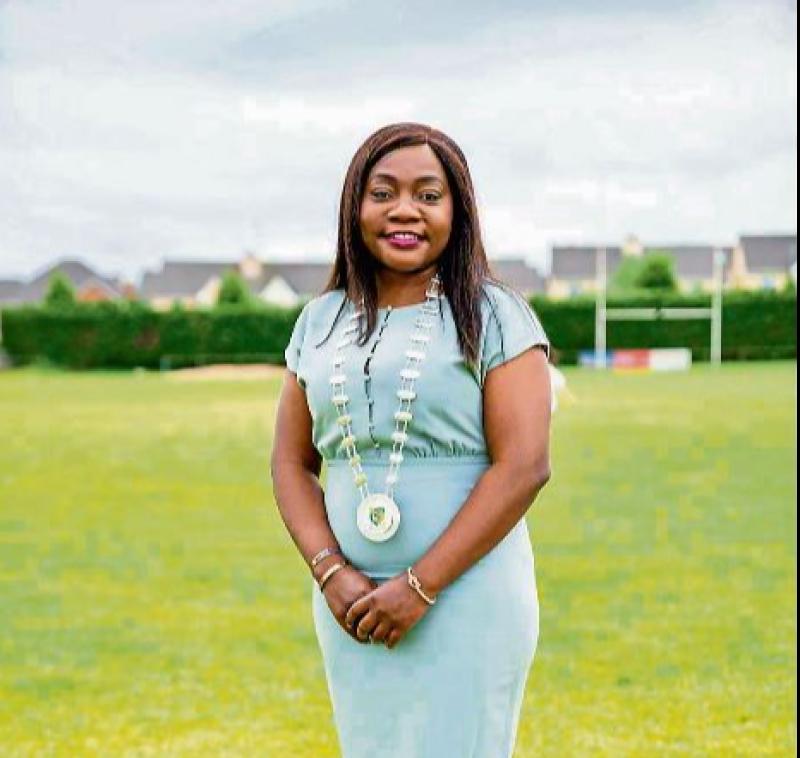 She made headlines last year as she became the first black woman to take on a mayoral role in Ireland and, now that the chain has been passed on to Cllr Gerry Hagan, African princess, Uruemu Adejinmi, can’t help but reflect on her time wearing the chain.
Uruemu has been in politics since her co-option to Fianna Fáil two years ago after Joe Flaherty was elected to the Dáil. But the Delta State, Nigeria native is no stranger to the world of politics.
In fact, her father, His Royal Majesty Ogurimerime Okuri I, the Ovie of Agbon, had a great interest in politics before he stepped up to become a traditional ruler.
“It’s been a great moment for myself and for my family,” said Cllr Adejinmi.
“My father would have been very active in politics before he became a traditional ruler. A lot of people saw the international papers addressing me as a princess. That is because my father is a king. He’s a traditional ruler in Nigeria and so up to that point he was very active in politics.
“So he had to take a backseat of politics to be a traditional ruler because obviously he has to take a political standpoint in terms of the political affiliations of the people in the kingdom, the area he governs. He has to be able to be independent in his dealings with them, regardless of his political affiliation.
“Because my dad was so active in politics, I grew up learning the ropes of politics and observing. It’s been a very personal moment for him as well. He’s said to me so many times it’s like he’s the one in the role because he gets so many calls and so many compliments. And actually, he has visited Ireland for the first time since I became Cathaoirleach.
“So I want to thank my dad and my mother, Her Royal Majesty, the Queen of Agbon, for instilling the ethics in me and instilling the discipline in me that was helping me in my role as a councillor and, in the last 12 months, as Cathaoirleach.”
During her term as Cathaoirleach, Cllr Adejinmi was proud to welcome visiting diplomats from different countries in Europe, Africa and Asia - something which she said was extremely positive for Longford, helping different cultures to feel a sense of belonging in the community.
Some highlights from her year wearing the chain included putting a focus on the old Garda Station on Dublin Street, which has been unoccupied for some time, and initiating a conversation with the owner of the building to bring it back into the public eye.
She is also proud to have kept the Providers building on the agenda for Longford Municipal District to ensure a decisive course of action is reached for that building.
“One that I feel very proud of is the refurbishment of the X-ray unit in St Joseph’s,” she told the Longford Leader.
“It’s been a breath of fresh air for the staff. They feel very happy going to work in a newly refurbished building. It improved infrastructure and there have been a lot of positive comments and great appreciation from people in the town. So that is a big win for me.
“I’m grateful for the help I got from local TD, Joe Flaherty and I’m very thankful to the Department of Health and Minister Stephen Donnelly for making that possible as well.
“Those are some things that are highlights from my term. And, of course, having our first, physical Africa Day in Longford is a personal achievement for me as well,” she added.
“It was great to see the presence of Africans and non-Africans coming together to celebrate the African culture, the African tradition, dressing, African instruments
“There were a lot of state bodies present as well and community groups who came to talk about their product, including TUSLA, LCRL, the Garda. There was representation from the pilot programme, the LCSP and there was brochures from Longford County Council as well. Those are some highlights from my year as Cathaoirleach.”
Uruemu is extremely grateful for the level of professionalism and support she has received from the executive and elected members of Longford County Council - a fact which she stated with gratitude when addressing her colleagues at last week’s Longford Municipal District AGM.
“It has been a long twelve months, coming out of Covid,” she said.
“It’s been a year of learning for me and I have a renewed appreciation for the level of work done by the council executives and staff in terms of adapting to the remote working and then hybrid working when restrictions were relaxed and, in all of this, trying to maintain the level of service that the community are used to, trying to keep things ticking along.”
She also expressed her gratitude to Director of Services, John Brannigan, area engineer Eamonn Bennett and the entire council team “who are always quick to turn around requests and queries so that we can execute our roles properly”.
“I want to thank my family and my husband, Kenny, and congratulate him for recently becoming an Irish citizen this Monday in Killarney,” she said, noting a photograph of herself and her husband which appeared on the front page of the Irish Independent last Tuesday.
“Again, Longford was represented in the national papers, which was a great moment for Longford as well. Thanks to my children, Tomson, Samuel and Alexandra, for their unwavering support. They have been my absolute cheerleaders.
“I am happy, at this point, to hand the chain to my successor,” she concludedat last week’s MD meeting.