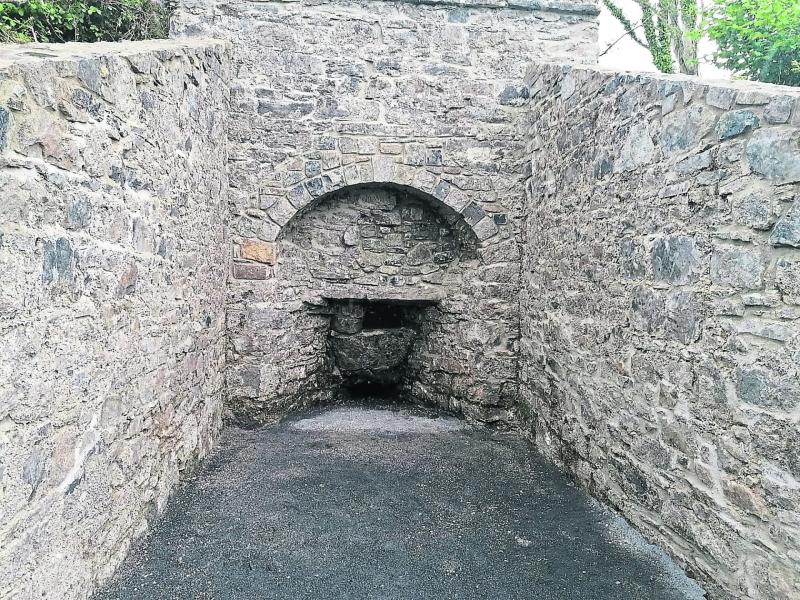 A Kenagh resident has expressed outrage at the vandalisation of a two century old structure.

The Kenagh lime kiln was recently restored using traditional methods to preserve the heritage of the historic feature.

“It was only opened on June 17,” Paddy Egan told the Leader, “People from all over Ireland attended the opening. The restoration was undertaken by traditional stonemasons from Aughnacliffe, yet here we are speaking about an act of wanton vandalism.”

The newly restored lime kiln is located on the popular forest walk to the lime tree avenue. It was restored using traditional lime mix: “It a credit to the tradesmen and the council regeneration team who oversaw the work,” Paddy said.

The freestanding single-bay lime kiln, was originally built in the 1820. Constructed of coursed limestone rubble it is comprised of a arched front, an former oven aperture, with dressed limestone voussoirs and cut stone lintel.

The Irish Inventory of Architecture highlighted the historic importance of the kiln: “The interesting survival of a former lime kiln, probably built in the early-nineteenth century, which is of technical merit. It is well-built using local limestone and is an appealing and unassuming element of the agricultural/industrial and social heritage of County Longford.”

The embankment to the rear was built to allow for the easy loading of limestone through an opening in the roof of the kiln. Lime kilns became popular in Ireland during the eighteenth century and were once quite a common feature in the rural landscape.

They were used to burn limestone to produce lime. Lime was used for building as a mortar and a render, or as a fertiliser. Lime was also used for lime-washing buildings, particularly farm buildings, as it was regarded as a cleansing agent at the time. The Kenagh kiln supplied lime for the Mosstown Estate.

Small rural lime kilns, like the Kenagh one, started to go out of common usage during the late nineteenth-century with the advent of industrial-scale lime production facilities and improvements in the transport network, particularly the development of the railways.

Paddy says the damage to the restored kiln is wanton: “They took away a ring of stones that made up the chimney. They pulled out stones and pegged litter all around it. After all the work that went into the restoration it is shocking to think people could do this.”