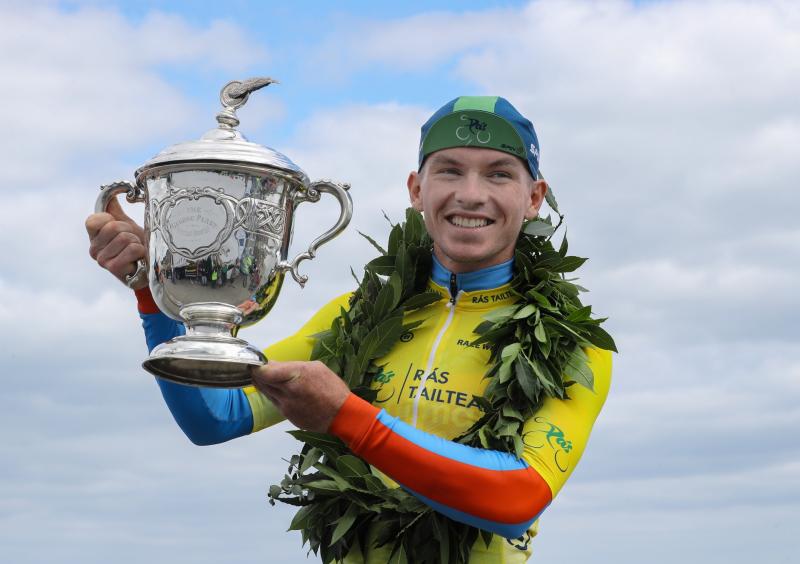 Daire is the first Irish winner to achieve this since 2008 and is a member of the Cork All Human/VeloRevolution team.

Daire has strong links with Killashee and he is a son of Eilish Neary and grandson of Cella and the late Mike Neary, Ballinakill.

Indeed, his number one supporter is his Granny Cella!

Best wishes are extended to Daire and all his family, he is wished continued success.

In the Cycling Ireland King of the Mountains competition, Dean Harvey did enough to capture the final honours from overnight leader with Feeley also taking the honours in the Bective Stud overall county rider classification

The final stage was a relatively short route, featuring two categorised climbs at Slane and Collon before the race would enter Blackrock @ 95km for four laps of a 10km circuit which would finish the 2022 edition of the Rás Tailteann.

After the flag dropped, the race took off at a ferocious pace averaging 50 km/hr over the first 30 minutes of racing on the roads out of Kinnegad. The peloton wasn’t letting any breaks go in the early phase of the stage, with the lined-out peloton entering Navan at 60 km/hr.

There was plenty of hard racing over the next 30km as the peloton passed over the two categorized climbs in Slane and Collon. Dean Harvey of Team Ireland who started stage 5 second in the KOH classification took full points on both climbs, and as a result was confirmed as winner of the Cycling Ireland KOH classification.

Although a number of break attempts were made as the race approached the finish circuit in Blackrock, nothing was sticking as the bunch entered the spectator filled roads of Blackrock, Co. Louth. Action packed racing followed over the next hour including a dangerous group of 4 riders going clear building a gap of 30s over the peloton. They included Ryan - Team Ireland, Watson - Embark- Bikestrong, Perrett - Dublin: Spellman and race leader Feeley - Cork: Velo Revolution. The break worked well together however the peloton weren’t letting the gap grow too big. With 10km remaining, the race was all back together with the pace holding at 50 km/hr as the race approached the finish in Blackrock town.

Kevin McCambridge took advantage of a brief stall in the peloton and attacked with 5km remaining. He built an advantage of 10s with the peloton hot on his heels passing through the flamme rouge of 1km to go. McCambridge held on for victory by a small margin with Matthew Teggart of Cycling Ulster winning the bunch sprint for second followed by Matteo Cigala of Carlow: Dan Morrissey in third.

Finishing safely in the peloton, Daire Feeley retained the race lead through stage 5 and was presented with the race winners George Plant Trophy  and the cycling Ireland yellow jersey. His performance throughout the race was extremely consistent and his time gain on stage 3 into Lisdoonvarna proved critical in sealing victory.

David Louis Sutton of Brocar-Ale (winner of stage 2) held on for second overall with stage 3 victor Adam Ward of Team Ireland rounding up the podium.

Cáirde Rás Tailteann would like to thank everyone who contributed to the success of this the 67th edition of an Rás Tailteann and look forward to seeing you all in 2023 for the 68th edition.