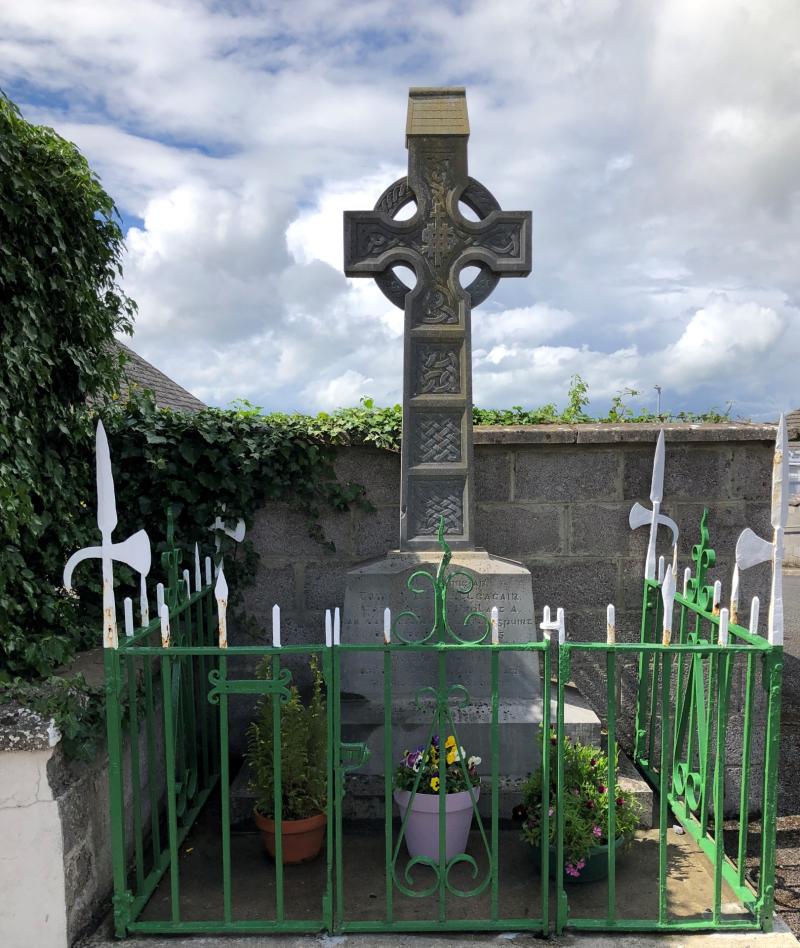 Monument erected in Drumlish at the spot where Tom Kelleher was killed on June 19, 1921. The monument was erected by the IRA and unveiled on October 21, 1934.

Given the success of the Longford Brigade IRA in engaging and defeating British forces during the War of Independence, it is surprising that only one IRA man died on active service in the county during that period.

That one fatality occurred when Tom Kelleher was killed in the town of Drumlish on 19 June 1921, one hundred-and-one years ago, this coming Sunday.

Native of Dromard
Tom Kelleher was born in Edenmore in the Parish of Dromard, but his family moved to Aughintemple, Parish of Ardagh, about 1920.

Consequently, Tom participated in engagements with both the North Longford and South Longford Flying Columns. He was regarded as one of the most prominent and most active of IRA men and he was on-the-run at the height of the conflict.

On the night of 18 June 1921, a number of leading IRA men met at Gaigue Cross, near Ballinamuck to plan activities. They were expecting to meet Paddy Morrissey, a Dublin man who had come to the area to reorganise the IRA after the death of Seán Connolly in Leitrim and the arrest of Seán Mac Eoin in Longford.

When Morrissey didn’t arrive, Tom Kelleher and another prominent IRA man, Peadar Conlon, set off on their bikes about 1.30am on that Sunday morning. They were both heading for South Longford, on different missions. As they entered the town of Drumlish, they never expected to meet enemy forces, but that is exactly what happened. They were confronted by a group of Tans or Auxiliaries, who ordered them to halt.

The two IRA men had revolvers, but it’s not known who opened fire first. Tom Kelleher was hit in the head and died instantly. Conlon dragged his body back some distance, although badly injured himself and he managed to walk back to Gaigue Cross, where some of his comrades were still expecting Morrissey to arrive.

Buried in Clonbroney
Tom Kelleher’s body was removed by the Tans to the Upper Military Barracks (where Pearse Park is now) and his funeral took place in St Mel’s Cathedral. He was buried in the Republican Plot in Clonbroney Cemetery, alongside his comrade Seán Connolly, the only other Longford man to die in action, although in a different county.

A few months later, after the Treaty, the military barracks was renamed Kelleher Barracks, in his honour. In 1934, a monument was erected in Drumlish, near the spot where he was killed.

Tom Kelleher was regarded as one of the heroes of the IRA during the War of Independence and his death was a serious blow to the movement just one-hundred-and-one years ago. Three weeks later, the Truce brought an end to hostilities.