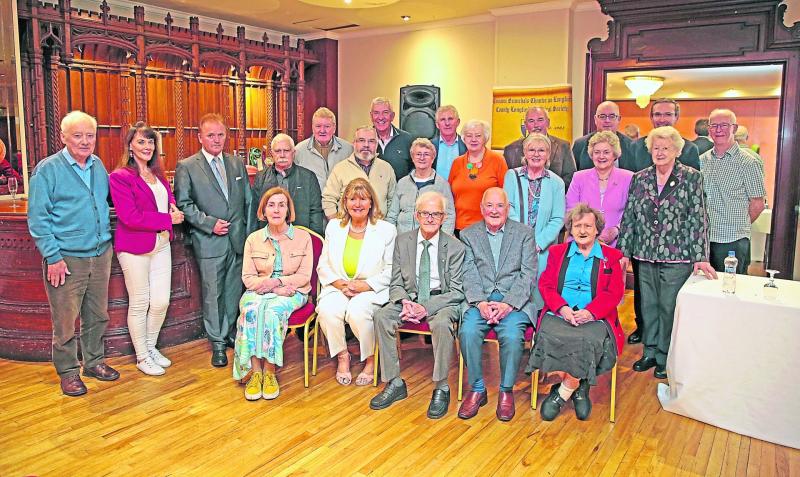 There was a ‘full house’ for County Longford Historical Society’s special event in the Longford Arms Hotel on Thursday night to honour Mary Carleton Reynolds and Jude Flynn.

Jude recently retired as the society’s President and Mary, one of the society’s Trustees, retired as County Librarian in the spring. Mary and Jude both grew up in Gortletteragh, Co Leitrim, and knew each-other well before their paths crossed in Longford.

Jude worked in Longford Post Office. He was a founding member of Longford Historical Society in 1967 and served as its Honorary Secretary for twenty-four years. He was President from 2011.

Mary joined the society’s committee soon after she took up the post of County Librarian in 1992. Through her years in the county, she was a tremendous supporter of the society’s activities, and the library became a ‘second home’ for it.

Chairman, Pat Donnelly, and the new President, James MacNerney, each spoke of the extraordinary service Jude and Mary gave the society and the county, and sincerely thanked them for all they had done.

In making a presentation to Mary, Jimmy Donoghue, who served as Chairman of the society when she arrived in Longford, recalled introducing her at the first meeting she attended. He referred to her tremendous work in his native Granard, including in reviving the Harp Festival.

Kitty Hughes made a presentation to Jude and gave a brief account of his involvement in a host of local organisations, including the Longford Genealogy Centre and the Longford Tourism Committee. She also spoke about his nineteen editions of Fireside Tales, which are so important in recording life in Longford.

After the formalities, attendees enjoyed refreshments and entertainment provided by Thomas Igoe.