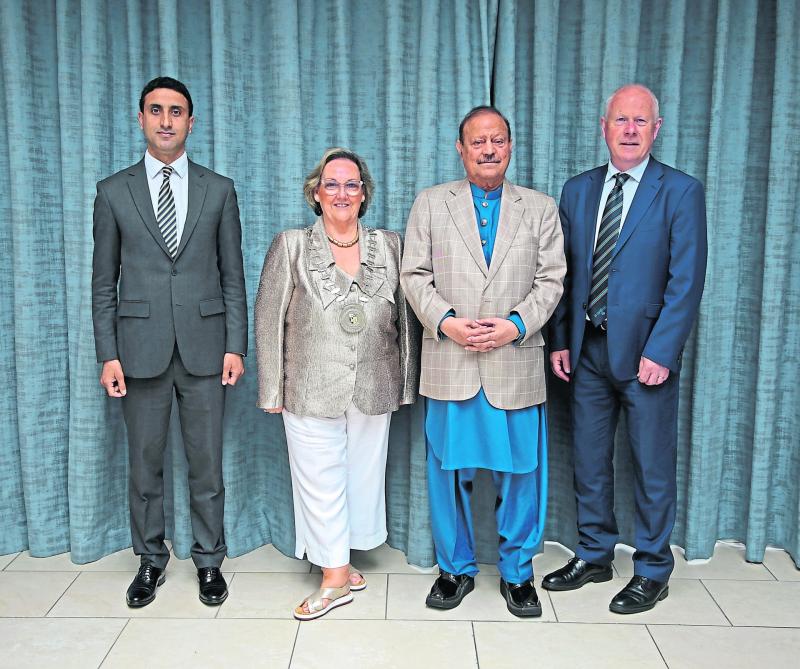 Longford played host to a whistle stop tour of the county town last week from the President of the Pakistan-administered state of Azad Kashmir, Sultan Mehmood Chaudhry and the Pakistani Ambassador to Ireland Shuja Alam.

President Chaudhry and Ambassador Alam fulfilled a number of engagements during their visit on foot of an invitation from Longford County Council Cathaoirleach Cllr Peggy Nolan.

Following this, the President and Ambassador visited St. Mel’s Cathedral, which included a tour led by Father James Mc Kiernan.

The President and Ambassador were given an overview of the history of the Cathedral including details of the restoration works carried out after it was destroyed by fire in 2009.

Afterwards, the President and Ambassador held discussions with Fianna Fáil Longford-Westmeath TD Joe Flaherty in the Council offices where they sought support for Jammu and Kashmir highlighting the occupation and treatment of Kashmiris.

One of the key themes that emerged from the discussions included the many Pakistani people that have contributed to county Longford. This included the proud and recent appointment of Aughancliffe’s Shairaz Hussain as Honorary Advisor to President Chaudhry.

Speaking following the visit, Cathaoirleach Cllr Peggy Nolan said she was incredibly happy to welcome the President and Ambassador to Longford.

In a statement, Longford County Council heaped praise on the Pakistani community who, it said, went “above and beyond” to ensure the President and Ambassador Alam were treated to a warm Longford welcome during their visit.