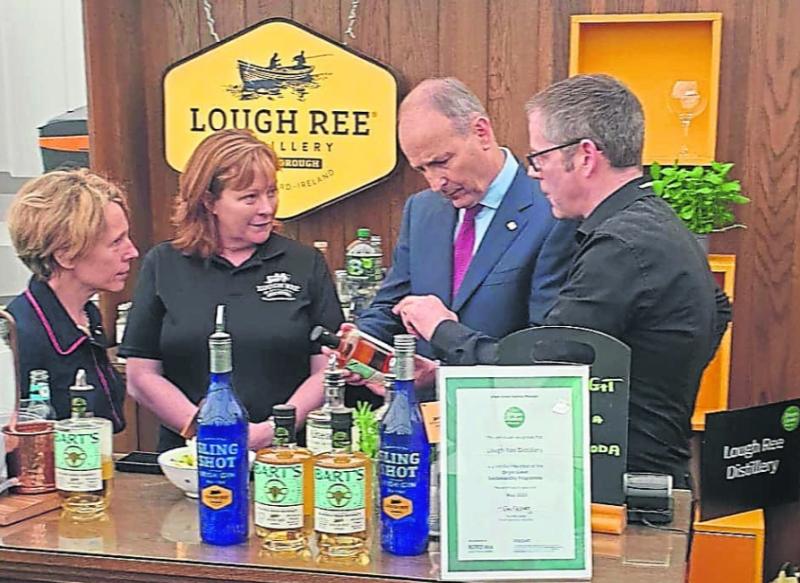 An Taoiseach Micheál Martin and Bord Bia CEO Tara McCarthy dropped by the The Bloom Inn where they met with Sheila Mullen and Michael Clancy and were introduced to their award winning spirits.

Based in Lanesboro, Lough Ree Distillery was founded in 2018 by the Clancy family, siblings Michael and Peter Clancy, Sheila Mullen.

It is best known for its Sling Shot Gin; Bart’s Blended Whiskey; The Bridge Series Whiskey; vodka and other spirits. Lough Ree Distillery is among 80 artisanal producers at the Food Village over the five days of #BordBiaBloom2022 .

The past week has seen Lough Ree Distillery pick up yet another prestigious accolade as Bart’s Blended Irish Whiskey, named in memory of their father, was awarded Best in Category and a Silver Medal at the American Distilling Institute awards 2022.

In February, Lough Ree Distillery captured the prestigious accolade of Best Family-Run Distillery 2022 at the Irish Enterprise Awards. In March, they helped launch a new strategy which sets out plans by Irish Gin producers and brand owners to maintain market share and grow sales by 2026.