Plans in motion to bring skatepark to Longford 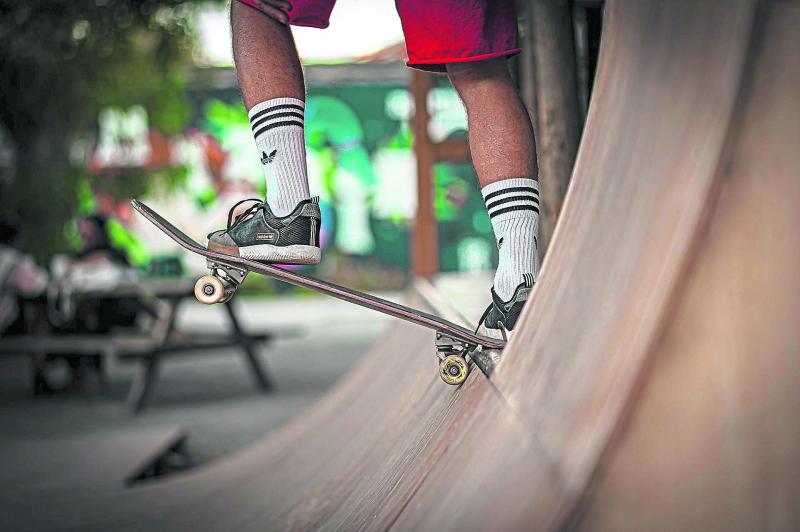 Longford county councillors have backed calls for a skatepark

Longford looks set to get its own skatepark following unanimous support from local councillors for the local skate committee who gave a presentation at last week’s meeting of Longford County Council.

Lauren Lawlor and Daniel Keogh spoke on behalf of Longford Town Skate Committee on the importance of acquiring a site and building a park for a sport that is becoming more and more popular in the county.

“Right now our closest skate parks are Athlone, Cavan and Mullingar, which means almost an hour’s drive for a safe and comfortable place to skate,” explained Ms Lawlor.

“This has been proven even more difficult for young people who don’t have access to a car to get to these places. We share the same sentiment, as many people do in our community, that it’s time Longford town had its own skate park.”

Councillors heard of how young people in the town and county have always struggled to find a safe space to practice skating, resulting in young people moving to the outskirts of the town and into places that are often not safe.

“We’ve struggled with anti-social behaviour and threats in the past and I’ve personally found myself and others in unsafe situations while trying to skate in town,” said Ms Lawlor.

“We’ve been forced to skate in places where a parent would not want to bring their child to pursue their skateboarding dreams.”

The meeting also heard of how skateboarding has recently been added as an Olympic sport and how it, like other sports, is particularly good for mental health.

“The skateboarding community in general is very good for the mental health of the younger community,” Mr Keigh explained.

“There’s a group set up called Skate Against Suicide up in Dublin that are constantly doing fundraisers for Pieta House.

“Over Covid-19 a lot of people were finding themselves segregated and over this time I’ve noticed, in Longford especially, that the community of skateboarders have really come together because of the amount of time they had to spend by themselves.

“When they came together, it really helped the community develop and I see it only getting bigger from there.

“A lot of the time skateboarders are people who are more solo kind of people who maybe have social anxiety and, with sports like GAA or soccer, they find it hard to incorporate themselves into teams,” Mr Keogh added.

“I’ve felt this way myself in the past but, over the years of doing skateboarding, I’ve noticed myself in later times joining back into clubs and stuff because I have found myself able to again.”

Furthermore, as skating is no longer “a fringe sport”, there is an opportunity to make a career out of it.

“If a skatepark was built, there could be possible opportunities for people opening skate lessons,” Ms Lawlor explained.

“If people are into photography or videography, skateboarding has always been a form of art style in a way. I think there would be great benefit to the whole community whether you’re a skater or not.

“All over the world, skateboarding is a form of self-expression that fosters creativity. As a community, we open arms to anyone, no matter what creed, race or gender expression.”

So far, the skate committee has met with County Longford Youth Services to discuss the possibility of providing a facility for local skateboarders following a number of promises that have fallen through over the years.

Committee members have done their research and have come up with a number of requirements to ensure the park is up to standard.

“I think the best thing about skateboarding is that it’s free and therefore the park must be free,” said Ms Lawlor.

“Skateboarding as a sport has always been enjoyed by people who come from low-income families and there mustn’t be any barriers in place between people and them wanting to skate.

“We ask that it be put in a place such as the Mall. This is where recreational activity is happening in the town and we wish to be involved and taken seriously as a sport. It would also be close to such amenities as a carpark, bathroom and lights.

“We ask that you consider putting shelter, at least over part of the park as Ireland’s inclement weather patterns will render the park unusable for the majority of 250 days of the year.”

“What we’re saying there with the weather is that we’re hoping to get someone in who would be a specialised designer of parks,” said Mr Keogh.

“With the water we’d need to make sure there’d be proper drainage to prevent the flooding of the park. We’d need to have the concrete put in properly so there wouldn’t be cracks in later days that would be costs that could’ve been covered at the start.

“We’d like to have the sun facing in the correct direction if we could, just for the likes of glare on the park and maybe for trees not to be too close to the park because of the plant litter and things like that because that would have to be cleaned up every day.

“We would also like maybe the location of the park to take into consideration if skating does flourish in the town that maybe we could possible extend the park out further in future times.”

Councillors were in unanimous agreement that a skate park would be a beneficial facility, not just for the town, but for the entire county.

Cllr Paraic Brady advised the committee to ensure the park is “done right” the first time, rather than making plans for potential future expansions.

“Usually, if you build something and then you realise there’s a niche for it and all of a sudden it gets bigger and bigger, then you can’t cope with the crowds that come with it,” he said.

“So get it designed, pick something that’s going to suit Longford and suit your needs and we will be fully supportive of you. You need to get the finished product to a stage that it’s world-class.

“And that means finishing the concrete to a standard that there are no cracks. Whatever it costs, get it right the first day. We’ll find money out of somewhere and we’ll get it built.”

Councillors commended Ms Lawlor and Daniel for the effort put into their detailed presentation with many members assuring them they had the council’s full support.

“Just to let you know, we haven’t been sitting on our hands,” said Cathaoirleach of Longford County Council Peggy Nolan.

“We actually have a site picked out. We walked the site with somebody who was to draw up some plans. But that was put on hold until we had this presentation because nobody knows what’s required as much as you that will be using it.

"And I take it very, very personal when I see that every county that surrounds us has an active skateboarding community and the facilities within the community to use that and to foster that community.

“You’re pushing an open door. I know it might not sound like it because it’s going on so long but I think the next step is you should engage with our director of services directly and also with the person with responsibility for drawing down the funding.

“There are loads of avenues open to you as a group and to us as a community to draw down the funding to ensure that this park goes ahead because you deserve nothing less and I can assure you this council is totally on your side.”