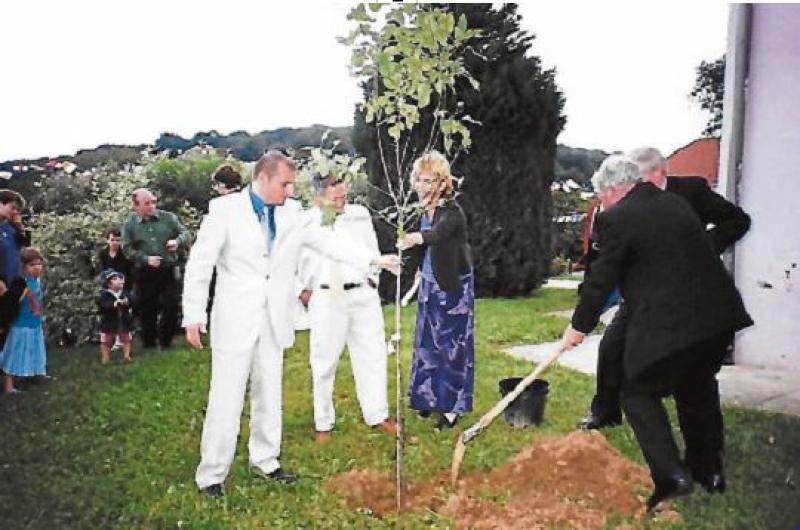 In a historic event, a group of people from Ballinamuck travelled to Essert in France to celebrate the 25th anniversary of the signing of their twinning oath on Europe Day, May 9, 1997.

On that day, twenty-five years ago, both groups planted an apple tree outside the Essert community centre, which has now grown and produces a plentiful supply of apples every year.

week, the two groups planted a lime tree in a ceremony attended by the Mayor, councillors, council officials and local school children.

At a civic reception the Deputy Mayor spoke of the enduring friendships and continuing exchanges particularly between the young people.

Twinning is an initiative of the EU to promote knowledge and understanding between different regions and countries. In the twenty five years, Essert has grown and now includes a Rue Ballinamuck.

Gifts were exchanged with the Ballinamuck group presenting a bog yew sculpture by Kevin Casey.

Paddy Howe, chairperson of Ballinamuck Community Enterprise thanked Essert Council for their friendship and hospitality and in particular Marie Christin Grandjean for her organisational and translation skills for the past twenty five years.

He invited the council and twinning group to visit Ballinamuck in July where the celebrations will continue for the twinning, the oldest in County Longford.