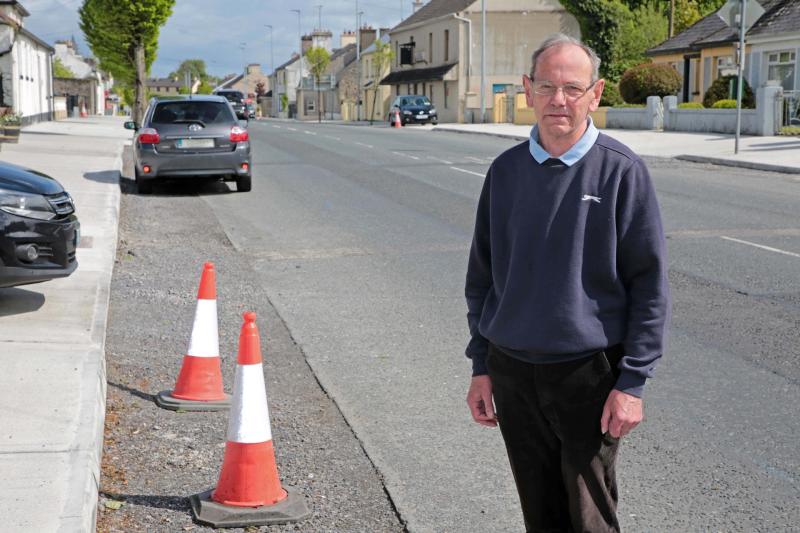 Gerard McGowan stands in the parking area in part of Newtownforbes

The fact that the village of Newtownforbes has not yet been finished has brought up a range of safety issues, according to local man, Gerard McGowan, who has expressed his anger at the lack of proper parking bays in the village.

Mr McGowan, a former publican in the village of Newtownforbes, said that he has been receiving very little from Longford County Council by way of reassurance.

"A few weeks ago the County Council were in town to launch the squirrels in the village,” he said.

"But this village has not been finished. In 2019 we were told there’d be parking bays between our gate and the church. I suggested at the time to put parking bays in.

"What we got were flowerbeds. You still have to open your car door into traffic and for the elderly people, it’s a disgrace."

The area has become a danger, according to Mr McGowan, who explained that he himself had an incident recently where he struggled to get by a car that was parked in the "flower bed" near his home.

"This is a safety issue. There’s enough room to put in three or four parking bays between my house and the church," he said.

"When you think about health and safety in today's terms, there will be an accident and Longford County Council will be pursued.

"The tarmac-ing is supposed to start next week and once the tarmac goes in, as far as I’m concerned, the parking bays can't go in.

"There was concrete put around a pole that was supposed to be removed. You could call it Mr Nuts and the village not finished.

A spokesperson from Longford County Council, when contacted by the Longford Leader, commented:

"The roadworks contractor will carry out the remaining road resurfacing work on the nights of Monday, Tuesday and Wednesday next week (16-18 May). Road markings will be placed as soon as resurfacing is complete. This will effectively complete the works in Newtownforbes.

"Prior to this scheme, there was no full-width parking bays on this section of the street in Newtownforbes. As part of this scheme, the footpath between McGowan's Pub and the entrance to St Paul’s, Church of Ireland grounds has been narrowed. This has facilitated full-width parking spaces. This will be evident when the road markings are in place."

Longford County Council has since issued an alert via the MapAlerter app that nightly roadworks will take place in Newtownforbes from 16 to 19 May.

"Resurfacing works will take place in Newtownforbes, Co. Longford, beginning next Monday night, 16th May, 2022, from 7pm. Works are expected to take three nights to complete. Traffic Management will be in place."