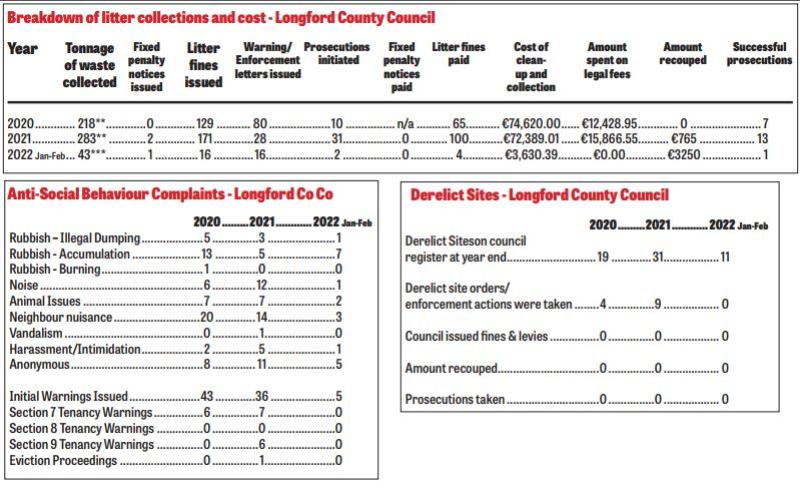 Longford's sprialling illegal dumping crisis is now so bad it is “endemic from one end of the county to another.”

That was the gloomy prognosis put forward by local politcians this week following revelations contained in a special Longford Leader investigation into the rising scourge of illegal fly-tipping across the county.

Those studies uncovered how local authority officials were forced to remove more than 540 tonnes of domestic waste since the start of 2020.

And according to local Cllr Paul Ross, the situation facing county council chiefs could not be more onerous.

“There is evidence of an increase in dumping and as an elected representative I am getting more calls than I have ever been getting,” he said.

The Fine Gael councillor is no stranger to raising awareness about a topic which is costing council bosses tens of thousands of euro each year in clean up and associated legal costs.

In January, the Legan based representative was left “disgusted” after a deluge of domestic waste was found strewn across a popular stretch of Ardagh Mountain.

As recently as last week, Cllr Ross said he had been notified of similar incidents being reported just off Edgeworthstown's Main Street and Ardagh respectively.

He said despite the best efforts of environment officials on the ground, the problems facing relatively small local authorities like Longford continue to multiply.

“I do acknowledge that the council have been very goood at collecting and removing rubbish while also having some successful convictions,” he said.

“The bottom line is the penalties have to increase and more people need to be caught in the act (of illegal dumping) because it is just endemic and people are disgusted by it.”

The former county council cathaoirleach was equally at pains to stress the importance of tighter restrictions being imposed on the owners of derelict sites.

In figures obtained by this newspaper under the Freedom of Information Act, not a single financial penalty or prosecution has been taken against suspected offenders over the past two years.

“That's one area the council will have to address as one (dereliction) feeds into the other,” added Cllr Ross.

Independent Cllr Gerry Warnock said the time had come for those found guilty of illegal dumping to have any financial penalties taken directly from income.

“Attachment orders are the only game in town at this stage,” he said.

“This whole issue is a complete and needless waste of council resources, both human and financial and if these people had a bit of civic pride these resources could be diverted elsewhere.”

“Littering and Illegal dumping continue to be a blight in Longford and the costs year on year to clean up & collect litter coupled with the challenges of the Council to recoup these costs is a matter of grave concer,” she said.

“The proposed legislation empowering local authorities to use CCTV and other GDPR-compliant technologies in prosecuting offenders will hopefully see a decrease in littering and illegal dumping in our communities and help Longford County Council recoup costs.”