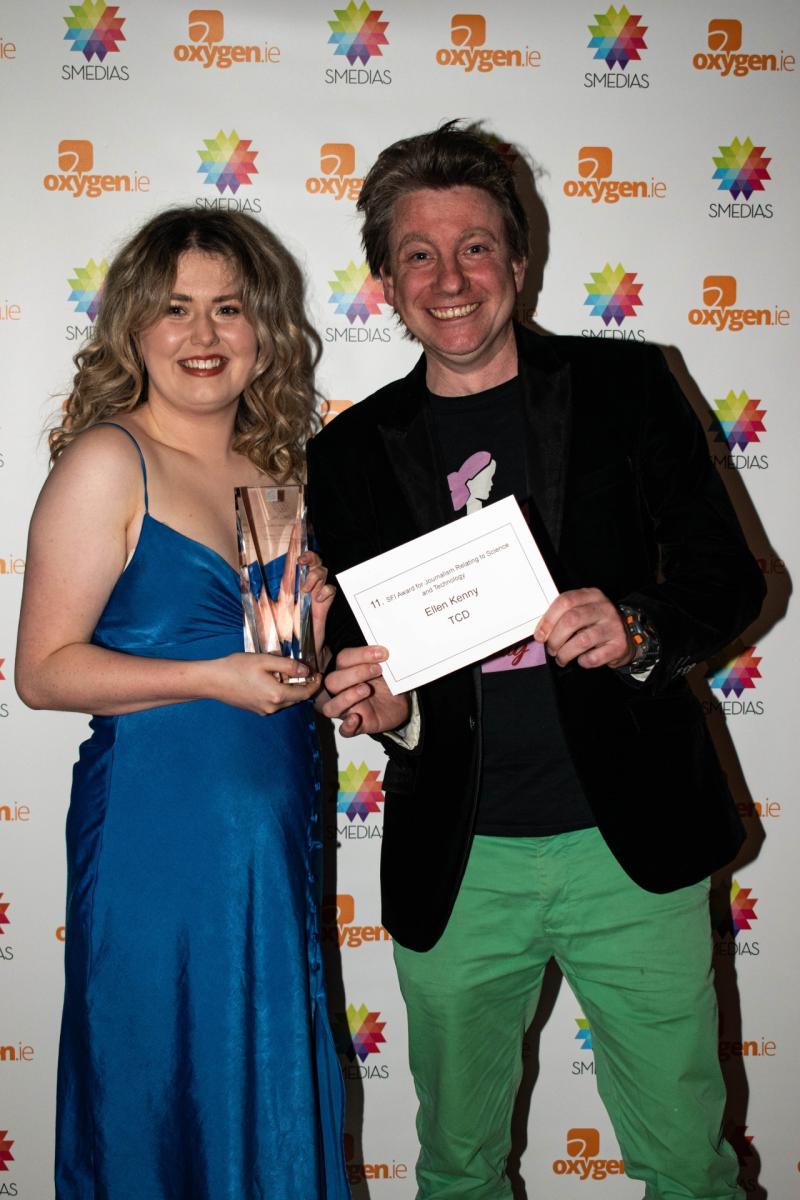 Longford's Ellen Kenny was the winner of two awards at the National Student Media Awards ceremony in the Aviva Stadium.

Ellen is a student of Politics and Sociology in Trinity College Dublin and is currently the features editor of Trinity News.

The National Student Media Awards have been running for the past 22 years and have seen media and journalism stars such as Samantha Libreri (Editor of the Year, 2004), Sean Defoe (Radio Journalist of the Year, 2015) and Colm Flynn (TV Production of the Year, 2010) on the podium over the years.

The event on Thursday, April 28 was the the first in-person awards ceremony since 2019.

Ellen took home the Journalism Relating to Science and Technology Award and the Features Writer of the Year: News & Current Affairs award.

Judge of the award, Elaine Burke of Silicon Republic, said of Ellen’s work in science and technology journalism - “this writer has fantastic storytelling ability. I was engrossed, engaged, and I learned. I really enjoyed how there were elements of computer science and humanities combined, as well as some history giving context to the present.”

She surely has a bright future in front of her and is a huge supporter of independent student journalism, saying “[it] has been one of my favourite things about college life - throughout the pandemic, [student publications] have remained engaging and informative for readers and welcoming to anyone who wants to get involved.”

The SMEDIAS have a long history of celebrating Irish student’s achievements in media and have introduced a number of new award categories over the years to reflect the changing skills and and opportunities available in the Irish media industry.

Hosted by Oxygen.ie, the SMEDIAS are one of the most important dates in the student calendar. They allow students to showcase their work in Journalism, Radio and TV Production, Broadcasting and Writing to prominent figures from the Irish media industry to judge.

The impressive lineup of judges for the 22nd annual awards ceremony included; journalists and editors from national publications, leaders and stars in Irish media. Some of the celebrated judges included; award-winning author Anne Griffin, award-winning director and screenwriter Robbie Walsh.

The 22nd SMEDIAS ceremony kicked off with a keynote speech from Dee Forbes, director general of RTÉ. The awards were visited by a number of famous faces and media leaders such as Fionnan Sheahan, Ireland Editor of the Irish Independent, Aoife Moore of the Irish Examiner, Ray D’Arcy, Sean Defoe, Zara King and Gavan Reilly.