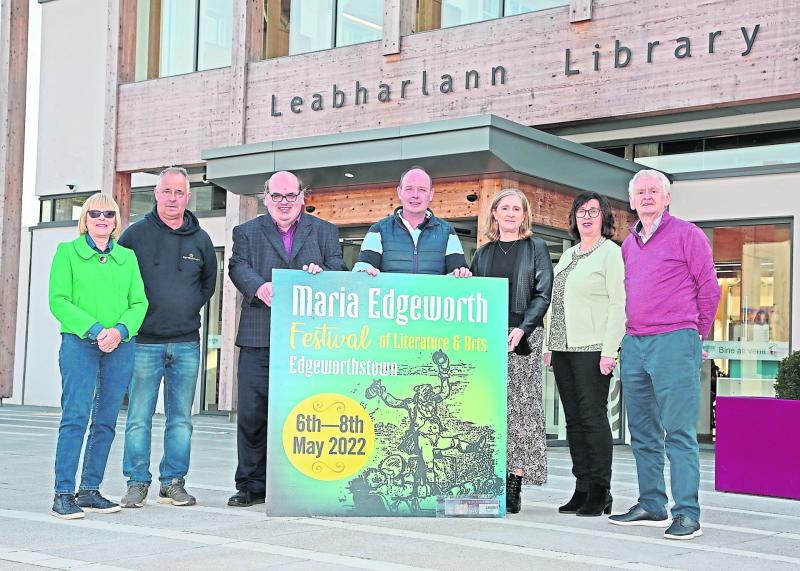 The Maria Edgeworth Festival committee are delighted to announce patrons will once again be able to attend in person. It has been a difficult few years for everyone so it is great to be back. The festival committee have put together a packed programme of events which will commence on Friday the May 6 and run until Sunday the 8th culminating with a family day in the Green.

As usual, the festival held its annual poetry and short story competitions and there was a large entry. The adjudicators were June Caldwell and John McAuliffe, winners will be announced at our Culture Night on Saturday the 7th in the Manor, former home to the celebrated Maria Edgeworth in whose memory the festival is held.

The committee have endeavoured to have something in the programme that will appeal to all. The first event on Friday morning is where 18th Century Ireland meets 21st Century Ireland, this is where characters from the 18th century will meet active retired citizens in the Green.

John Mc Gerr has made a wonderful film of the town down through the ages which will be shown. This will be followed by an Art Workshop in the Green; along side this will be the wonderful guided walk of the town taking in the Harry Clarke stained glass windows and the walled garden of the Manor.

On Saturday morning there will be children’s storytelling our wonderful new library with Eileen Moynihan alongside this there will be a Short Story and Poetry Workshop with June Caldwell and Professor John Mc Auliffe.

On Saturday at 3pm at the library there will be a music session on the Gig Rig. The festival’s annual Culture Night in the Manor is a highlight of the festival, it is when the eagerly awaited announcement is made of the winners of the annual Poetry & Short Story competitions.

The winners will also have the opportunity to read from their work in public for the first time. The evening will be a feast of music and readings with June Caldwell, John McAuliffe, Dr Philip Brady, Sarah Haughey and Ríl Óg.

There will be an after concert get together in the Goldsmith bar with free refreshments. The festival comes to an end on Sunday afternoon with a family 18th Century Tea Party in the Green, there will be a drama performance by the acclaimed Mostrim Players based on the Life & Times of Maria Edgeworth written by our own inimitable Pauleen Flood and directed by Kate O’ Donoghue.

This will be followed by a costume Tea Party where people are invited to attend in costume, there will be prizes for the best outfit.

During the Tea Party there will be a feast of music as part of the Longford Live and Local programme. There will also be lots for the children to do with games, activities, face painting etc.

The festival committee would like to acknowledge the support of Creative Longford, Longford County Council Live & Local Programme, Longford Tourism Tony Garvey of Garvey Sheds, C & D Foods and Hugh Quinn of Quinn’s Supply Stores without whose support the festival could not happen. Great credit must go to the hard working committee who have managed to run this festival for the last 26 year.