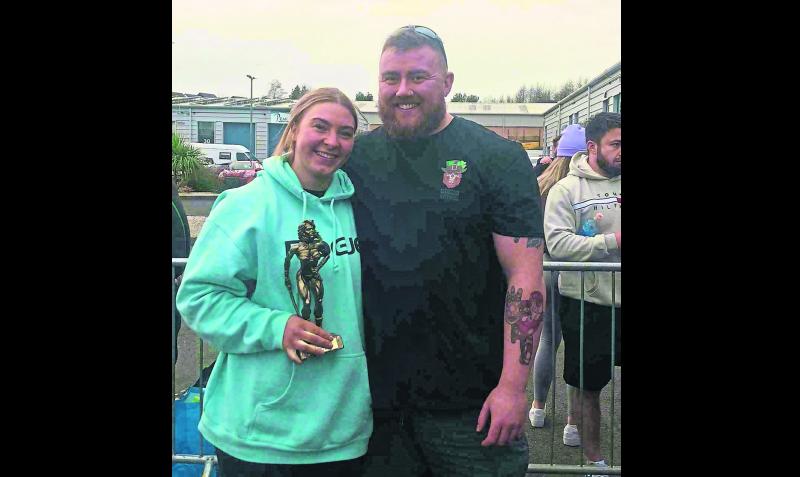 Incredibly, in her debut competition and having weighed in just the day before, Longford’s Jade Hoare was crowned Ireland's Strongest Woman U82kg at an event in MK Strength & Fitness, Derry.

There certainly must be something in the Aughnacliffe water because that's two national titles for the area - Jade being Ireland's Strongest Woman U82kg and her partner, Jack Harkin, was the winner of the Republic of Ireland's Strongest Man 2021 title.

Jade only decided to compete in strongwoman shortly after Christmas after becoming interested in the sport due to Jack’s involvement in the sport and Ireland's Strongest Woman on Sunday, March 20 was Jade's first competition to enter.

Jack explained, “Her training didn’t change too drastically as a lot of the events were movements she trained for anyway.

Anything that couldn't be trained for in Horsepower Gym, where she works as a Personal Trainer, she could train at my parents house as I have the shed equipped with every sort of strongman equipment you can think of.”

Jade’s competition was made up of five events; an axle deadlift for maximum repetitions; an overhead press medley which consisted of a barbell, a log and a second barbell; a farmers walk into a sandbag carry; a super yoke carry for maximum distance; and the last event was a sandbag that had to be lifted over a 4ft bar for repetitions.

After four events Jade and last year's champion were level on points so it all came down to the last event and whoever won that took the title! With Jade completing eight repetitions and the former champion completing six repetitions it was clear there was a new champion. Jack remarked, “To say my heart was in my mouth was an understatement but I never once doubted Jade’s ability!”

Jack’s next competition will be Ireland's Strongest Man in August, after that he will have a qualifying competition in September for Giants Live Britain's Strongest Man and then he has The Official Strongman Games World Championship in Florida in November.