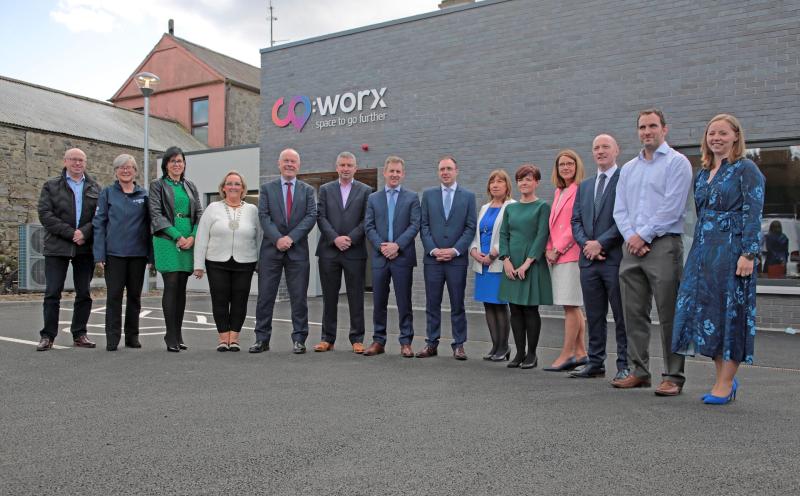 Edgeworthstown is fast becoming the county's "home of innovation” after a new, state of the art digital remote working hub was officially opened last Thursday.

That was the overarching message as the eyes and ears of the wider public were given the chance to catch a first glimpse of co:worx, a €1m enterprise centre in the heart of the mid Longford town.

Cathaoirleach of Longford County Council Cllr Peggy Nolan said the end result was indicative of a community and urban centre that was very much on the crest of an economic wave.

"They have got a committee together of people that are like minded and who sees the value of what their town has to offer," she said of a band of local volunteers who helped bring the project to fruition.

"This is the home of innovation and a can do attitude, the home of people who won't let go and who will knock on every door possible to achieve what they want for the people that live in this town."

The volunteer led project which is close to five years in the making will be able to cater for up to 38 remote workers and start-up entrepreneurs.

Alongside affordable workspaces with a mix of offices, the newly opened facility will provide hot-desking capabilities, meeting rooms as well as an event space and a POD/VOD cast studio.

Junior Enterprise Minister Robert Troy said the decision taken to purchase what was the town's former Ulster Bank premises in 2017 and transform it into the modern day and spacious facility it is today could not be understated.

"This is a special day for Edgeworthstown, a day when you bring to realisation an initiative and work that has been ongoing for the last number of years," he said.

The Longford-Westmeath TD also drew laughter among those watching on from the floor as he joked about how his presence might be viewed among his own constituency colleagues.

“Micheál Carrigy wants to see more of me, Joe Flaherty doesn’t want to see me in Longford at all,” he said to widespread amusement.

"It's a day which sees bringing back to life what was an economic hub in the form of a bank, now a state of the art building which will be an economic hub for many years into the future," he remarked.

"What you have done and achieved is magnificent.

"It's a great example of what can be achieved when you have collaboration between all the key stakeholders of community groups, Enterprise Ireland, local authority in working together to deliver for a community."

Hugh Quinn, Chairperson of Edgeworthstown Enterprise Hub Clg, the group behind the seven figure project said the move was as much about the town's last remaining bank as it was about enticing greater numbers to live and work in Edgeworthstown.

"In 2017 the Ulster Bank closed branch and 100 plus people were getting on the train every morning leaving to work elsewhere so we put our development heads together and came up with idea of turning this building into a remote working hub," he said.

Mr Quinn said the day's proceedings was one he had been relishing for some time as he namedropped his fellow committee members, Clare McEnroe, Carmel Noone, Padraig Jones, Dolores Courtney, David Murphy, Michael Nevin and Carl Grant.

“I could not overstate the amount of work this board has put in and in the professional way they have gone about, week after week and month after month on a purely voluntary basis for the good of Edgeworthstown,” he added. “It is critical insofar as possible that our town and area continues to be an attractive and secure place for families. It's also and just as important that infrastructure and facilities are in place to attract new families and new businesses.”