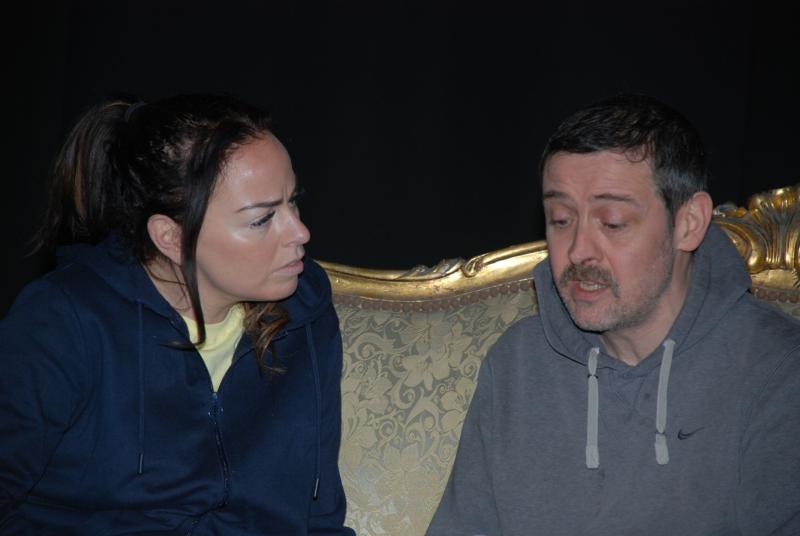 Backstage Theatre Group is returning to the stage at long last and, their first post- pandemic performance promises to be a night of laugh-out-loud comedy with Plaza Suite.

“We chose this play because we felt that after all the doom and gloom the past few years have brought, our audiences would be in need of a good laugh,” explained Christine O’Brien who is directing the upcoming performance.

“The original play is in three acts and we picked it because each act is a separate story so if we needed to drop an act, we could.

“Due to the high covid numbers over Christmas we couldn’t get started as early as we hoped so we dropped the first act and that left us with plenty of time to work on the two acts we are doing. Each act is 35 or 40 mins in length; the pieces are short and snappy and full of fun.”

Plaza Suite, by Neil Simon is a light-hearted comedy set in the late sixties. Two separate stories take place in the same suite in the Plaza Hotel in New York.

Muriel (Niamh Hanley) and Jesse (David Flaherty) are former high school sweethearts who seem destined for an extended stay. And Norma (Maureen Dunne) and Roy (Tom Lyons) are the mother and father of the bride (Georgina Hourican) ready to celebrate their daughter’s nuptials — if only they can get her out of the bathroom.

“I think that people will really enjoy this production,” Christine enthused.

“The actors have been working so hard (including online when covid struck a couple of times!) and are so well suited to their individual roles. The crew have also been putting in a huge effort to create a lavish set, which we hope will impress, and finding the perfect costumes to set off the piece.

Backstage Theatre Group are thrilled to be returning to the stage following a two year hiatus thanks to the pandemic.

“It is such a good feeling to be able to bring live theatre to our audiences again, there is nothing quite like it,” said Christine.

“For the actors, there is the joy of performing and for the group as a whole, there is the satisfaction of providing a fulfilling theatrical experience for our audiences to enjoy.”

But, despite all the setbacks, Christine feels the pandemic wasn’t quite a death knell for the arts, but a renewal for creativity in the industry - something which was bolstered by an increased appreciation for music, reading and performance, while people were in lockdown.

“I think that although the arts suffered terribly as a result of the pandemic in that all theatres had to close for so long, which was so tough; but there was also a surge in creativity and finding new ways to reach your audience - online shows, outdoor productions, play writing programmes, drama workshops etc.,” she said.

“The show must go on surely proved to be the case. I would hope that people would appreciate more what they maybe took for granted before.

“We are so lucky to have a fabulous theatre like Backstage in Longford, we need to support it as best we can by making the effort to get out and see the many great shows that are on offer, both local and professional, there are so many really great theatrical experiences to choose from.”

Plaza Suite will be staged on March 31 and April 1 and 2 at the Backstage Theatre. Tickets are available at backstage.ie or 0433347888.

“It’s the ideal opportunity to have a good Longford night out. Why not go for an early bird meal beforehand and we will be finished up nice and early for people to go for a drink after and hopefully rave about how much they enjoyed the show,” Christine suggested.

“We also have a special ‘Welcome Back’ offer on opening night, all tickets €10.

“A huge thank you to everyone involved in this production, it is a huge team effort and we hope that people will come out and support it, we really want to make this comeback a memorable one!”