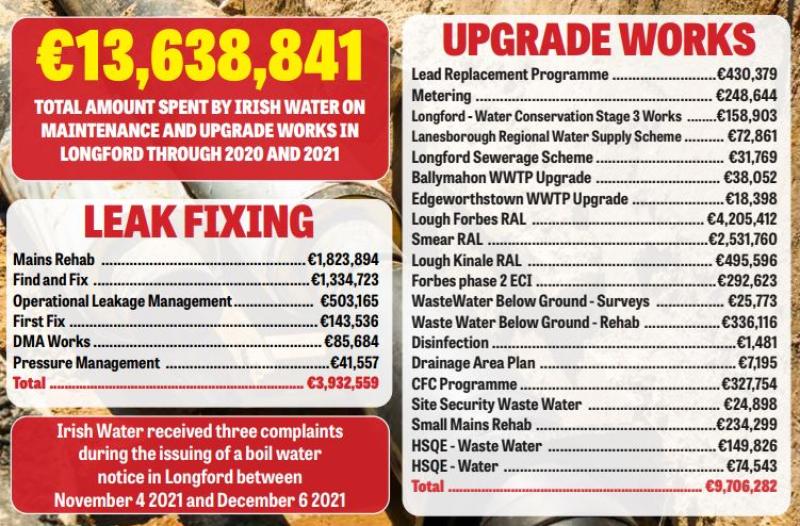 Irish Water has spent almost €14m of taxpayers’ money fixing leaks and replacing ageing pipes across county Longford over the past two years, the Leader can exclusively reveal.

Approximately €13.64m was shelled out carrying out a raft of repairs and improvement works over the course of 2020 and 2021.

The figures are detailed this week in a series of documents released to this newspaper under the Freedom of Information Act.

They show how over two thirds of that total, or €9.7m has been directed towards carrying out large scale water mains replacements as well as various enhancement works at 20 different locations across the county.

The remainder of monies allocated from the public exchequer reveal how almost €4m has been spent propping up Longford’s creaking water services network through the fixing of leaks, mains bursts and other maintenance related tasks.

Details of the vast seven figure sum which water bosses have used to maintain and improve supply levels countywide come barely two months after almost half of the county’s population emerged from a four and a half week boil water notice.

A cryptosporidium barrier at Newtownforbes’ Lough Forbes Treatment plant was found to have been compromised following a deterioration in raw water quality from the plant’s lake source.

Following consultation with the HSE, Irish Water and Longford County Council decided to issue a boil water notice, affecting 17,500 people in the process.

Figures obtained by the Leader this week show over €4.2m has already been spent on a large-scale overhaul of Lough Forbes Treatment Plant with expectations high that figure could rise further by the time works are scheduled to conclude later this year.

Like Lough Forbes, significant funding totalling over €3m has been spent over the past two years at two separate water treatment locations in the north of the county.

Irish Water chiefs have, over the course of the 2020-21 period allotted €3.02m in a bid to remove both its Smear and Lough Kinale treatment plans from its Remedial Action List (RAL).

The public utility has, meanwhile, spent over €400,000 to try and remove various bugs, chemicals and pesticides by carrying out a major lead replacement programme across the county.