Drifting to Eglinton: Longford teen not afraid to get her hands dirty as she gets to work on her own car 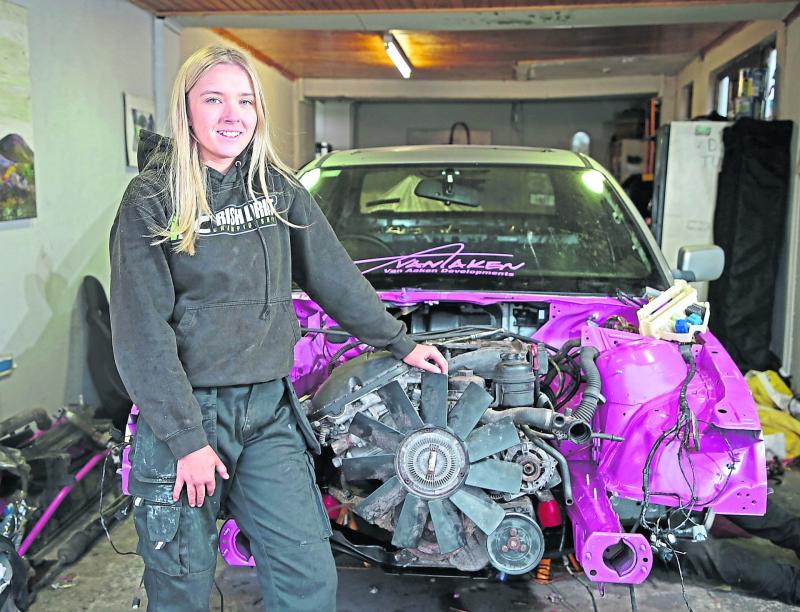 Longford teenager, Abbie Gerety, is putting her passion to work at the end of the month as she prepares for a girls drifting event in Co Derry.

The 16-year-old is heading north on February 27 to take part in the Irish Girls Car Scene Ladies Drifting event at Eglinton Airfield, where girls will be given the opportunity to practice their drifting skills.

Abbie is in the process of building her first drift car with the help of her older brother, Niall, and is smashing through all stereotypes, proving that motorsports are as fun for women as they are for men.

“From a young age, I developed an interest in cars from growing up with three older brothers who all had a huge interest in them and have had every car you can think of,” Abbie told the Longford Leader.

“My oldest brother, Niall, started drifting a few years back and I attended all his drifting events and fell in love withmotorsport.”

In the lead-up to the big event on February 27, Abbie is stripping down a BMW of its parts and rebuilding the car herself under the watchful eye of her brother, who is extremely supportive of her interests, documenting the process on his YouTube Channel, NiallGoesDrifting.

“I’ve learned all my skills from my brother, Niall, who helps me with all I need with the car,” she said.

“It wouldn’t be possible without him. I’ve made lots of friends in the drift scene also that would do everything to help out.”

Abbie is 16 years old and still in school, so she’s working off a small budget but has received a lot of support from KD Kustoms UK and Limitless Garage who are supplying Abbie with the parts she needs.

“My car started out as a very standard 318i e46 BMW but there just wasn’t enough power,” Abbie explained.

“We are now changing the engine to a 2.5 325 engine, which should be 200hp when it’s finished. The car is set up for drifting with differential, hydraulic handbrake, etc.

“It contains a lot of late nights in the shed and a lot of work but we hope to have it finished by February 27.”

The event is being organised by Nadine Leonii who set up Irish Girls Car Scene to allow girls to come together with the same love for cars.

“We will be making the trip to a track, Eglinton in Co Derry, on February 27 and I can’t wait to get some practice in and have a laugh with the girls.”

Abbie hopes to continue to pursue her passion in the coming years, with plans to get her driving licence next year, which will mean “another car to do”.

“I also want to progress in drifting and build some cool cars and attend lots of events,” she said.